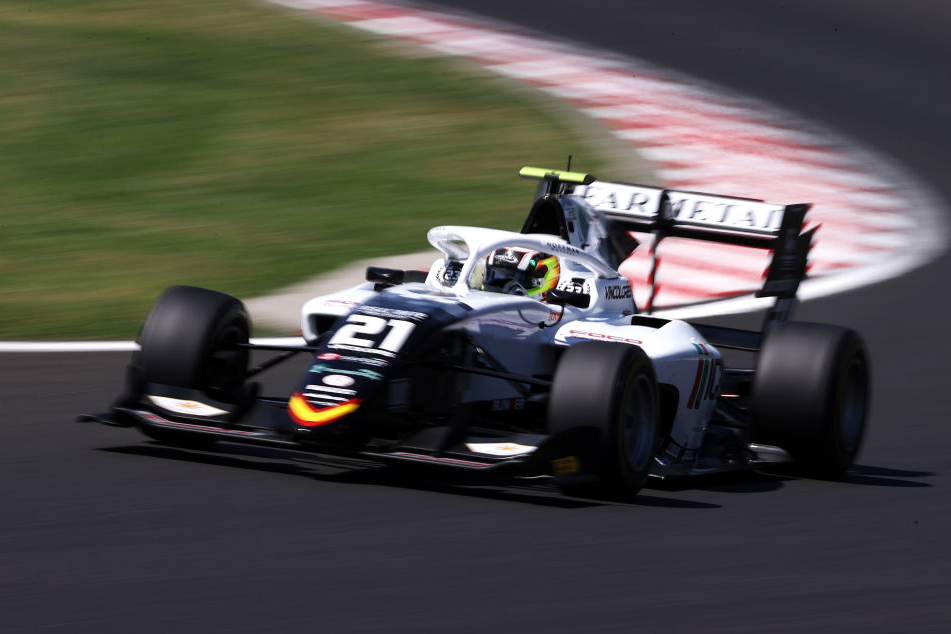 Lorenzo Colombo put in a controlled drive to take victory in the first FIA Formula 3 Championship race at the Hungaroring, as reversed-grid pole-sitter Jonny Edgar retired.

Campos Racing driver Colombo swept around the outside of Carlin’s Edgar through the opening corner on lap eight of 22 after getting a slipstream, but as the pair exited the corner Edgar slowed and retired.

Edgar had held the lead under pressure from Colombo, around the outside of turn one, at the start of the race. Those two were joined by Hitech GP’s Ayumu Iwasa in battle, as they went through the second and third corners of the opening lap Edgar was able to stay ahead but after touching wheels with Colombo and sending him wide.

Colombo kept in his mirrors, so Edgar picked up the pace but was unable to break away before his retirement.

ART Grand Prix’s Frederik Vesti then also retired, and that led to a safety car period. Colombo calculated the restart well and built a gap while trying to break the tow to the chasing Iwasa who had at one point fell back slightly and been under pressure from Prema’s Olli Caldwell.

Colombo succeeded to take both his and Campos’s first series win, while Iwasa claimed his best F3 result in second place as he had to manage his tyres late on.

Caldwell had a quiet race, holding third place after Edgar’s retirement but unable to match the top two’s pace thereon. He is now up to second in the points. Logan Sargeant kept on the tail of Caldwell for the opening laps and he finished fourth.

Championship leader Dennis Hauger passed rivals Vesti and Jack Doohan early on and then made a late-braking move into turn one on the struggling David Schumacher to move past the Trident driver for eighth.

At the safety car restart he passed Smolyar for sixth, and attacked Clement Novolak in the closing laps.

Jak Crawford and Ido Cohen made contact at the back on the final lap, which led to Cohen not finishing.