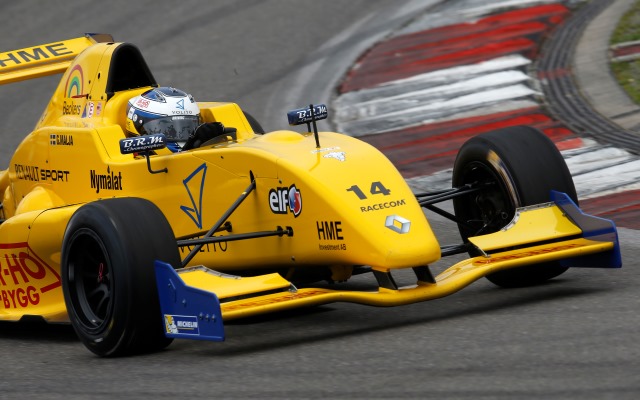 Gustav Malja came out on top in an incredibly close end to Eurocup Formula Renault 2.0 running at the Nurburgring on Friday, with the quickest five drivers separated by a mere 0.021 seconds around the near-two-minute lap.

The Swedish driver, a race winner at the German circuit in ADAC Formel Masters, set a time of 1m57.359s. That put him 0.015s ahead of fellow Scandinavian Dennis Olsen, who had earlier set the pace in the first session.

Steijn Schothorst, Levin Amweg and championship leader Nyck de Vries were then all within six thousandths of a second of Olsen’s time.

Andrea Pizzitola was 0.055s off the pace in fifth, ahead of Matt Parry, Bruno Bonifacio, Kevin Jorg and Anthoine Hubert.

After the day’s running was delayed by fog during the morning, Olsen’s first-session benchmark was 0.193s slower than the time that Malja would manage later on.

The Norwegian – who currently sits third in the standings – was 0.279s clear of the opposition, led by de Vries. Jorg was third, while fourth was Brazilian Victor Franzoni, who is making his return to European competition this weekend with the China BRT by JCS team. He held top spot at one stage during the second session, before falling back to 11th.

Nick Cassidy was fifth in the morning ahead of Malja and Pizzitola. Lotus F1 juniors Callan O’Keeffe and Alex Albon were eighth and ninth, with Bonifacio tenth.