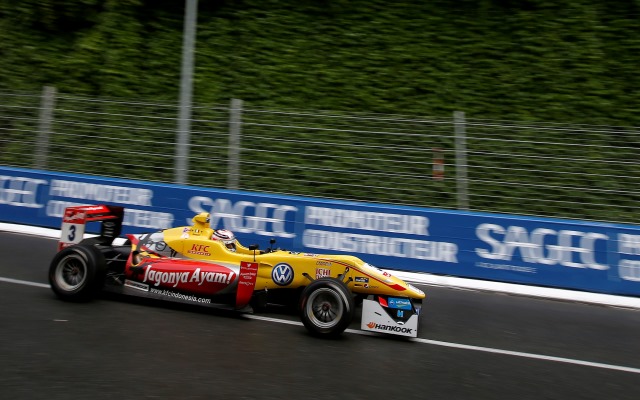 Antonio Giovinazzi took victory in the Pau Grand Prix in the third FIA F3 European Championship race of the weekend after a problem late on slowed Jake Dennis and denied him a hat-trick.

Dennis started from pole once more and kept the lead at the start after cutting across to block a slightly faster-starting Giovinazzi.

The safety car was required on lap one after a Pont Oscar clash that saw Kang Ling ride up the back of the car of Tatiana Calderon for some distance under braking.

With 16 laps done, Dennis looked set for victory but Giovinazzi was able to slash a one-second lead to almost nothing in the space of five laps.

Dennis appeared to briefly respond but then began to really struggle for pace, allowing Giovinazzi to pull alongside at the first corner Gare and at the Lycee hairpin before then finding a way past later in the lap with just four minutes remaining.

Giovinazzi’s victory is his second of the season, maintains his 100 per cent podium record so far this season and strengthens his championship lead.

Dennis tried to bring the car home in the points but was dumped down the order in the final laps and pitted on the final lap, taking the chequered flag in 23rd place.

Dennis tweeted afterwards that he had “bent suspension from lap two then five minutes from the end it completely snapped.”

As in the earlier two races this weekend, third-place qualifier Maximilian Gunther struggled to keep pace with the cars ahead of him but held off Charles Leclerc for the entire race to secure his maiden podium finish in F3 after a sixth consecutive top-three grid start.

Lance Stroll claimed fourth after a combative drive. The Canadian had fallen to 10th on the safety car restart when an ambitious move on seventh-placed Arjun Maini caused him to run wide, but the Ferrari Driver Academy ace managed to quickly tear his way up to fifth before Dennis’ problem.

Stroll was aided by a drive-through penalty for Markus Pommer when running fifth for being out of position at the start, and a technical issue that slowed early sixth-placed runner Alex Albon and caused him to pit.

Alessio Lorandi could have been fifth had he not been baulked when he attempted to pass the ailing Dennis around the outside of Pont Oscar, allowing Maini and Felix Rosenqvist to get past.

Michele Beretta was on course for his first points on his 42nd start in the series before crashing into the barriers, promoting George Russell to a final position of eighth.

The final two places in the top 10 were taken by the Mucke cars of Mikkel Jensen and Santino Ferrucci after Dennis made contact with Sam MacLeod at the hairpin on the final lap and Sergio Sette Camara bogged down on the exit of the turn after nipping past them.