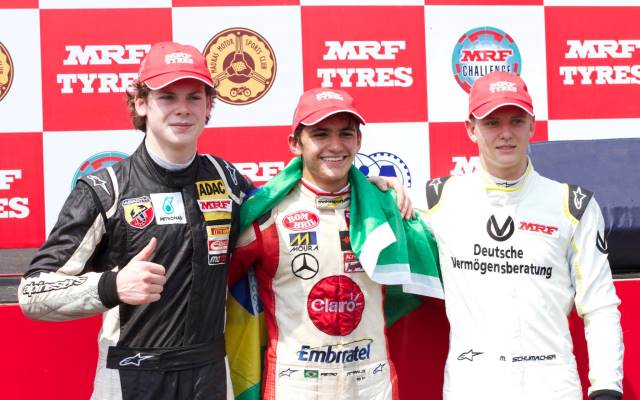 In the week he announced a move into Formula V8 3.5 for 2016, MRF standings leader Fittipaldi had claimed pole in Friday’s qualifying session ahead of Newey,?Tarun Reddy and Schumacher.

He then led Saturday’s opening race from start to finish, ending up 1.7 seconds ahead of Newey who improved on his previous best result in the series of fourth, having had his step up to Formula 3 confirmed since the last round.

After qualifying back in fifth, Alessio Picariello was up to third but was re-passed by Schumacher later on as the German – who is expected to join Prema for his 2016 European campaign – made the podium on his first appearance.

Tatiana Calderon was fifth ahead of Reddy and the Russian pairing of Nerses Isaakyan and Troitskiy. Max Fewtrell, fresh from securing a Carlin MSA Formula seat for the rest of the year, was 10th behind Dylan Young.

In race two, Reddy started from reverse-grid pole and led early on with Picariello up into second.

The Indian and the Belgian fought over the win for much of the rest of the race but collided in the closing stages, with both eliminated.

Calderon and Schumacher had been behind the lead pair but also came to blows and dropped down the order, meaning that Formula Renault racer Troitskiy ended up as the leader and held off Newey to take his second win of the campaign.

Isaakyan claimed a maiden podium in third ahead of Calderon, Fittipaldi and Schumacher.

Two other additions to the field for the final event are Enzo Bortoleto and Aleksanteri Huovinen, who have both signed to do BRDC Formula 4 this year with Double R, whose boss Anthony Hieatt has long been involved in the MRF Challenge.

The pair both made the top 10 in race two, with Bortoleto eighth behind Fewtrell and Huovinen 10th behind Young.