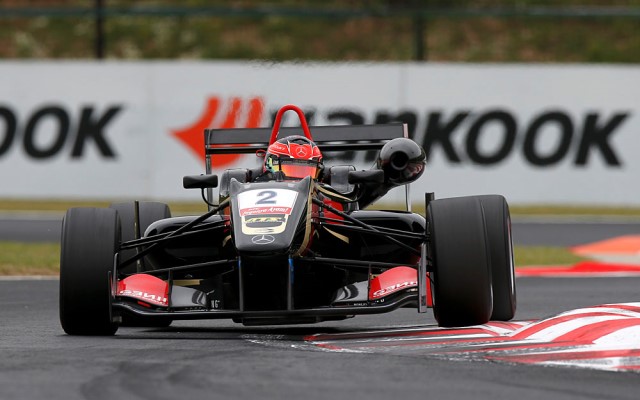 Esteban Ocon bounced back from the disappointment of finishing second in the opening race of the FIA F3 European Championship in Hungary by dominating second qualifying and claiming pole position for both of Sunday’s races.

The points leader, who started race one from pole but lost out to Tom Blomqvist after a bad start, set four consecutive laps in the 1m35s bracket.

The closest man to him – fellow rookie and Prema team-mate Antonio Fuoco – could only manage a best of 1m36.099s, leaving him 0.299s away from pole.

Lucas Auer looked like a threat to Ocon when he set the best first sector of all, but that lap was only good enough for third place in the end. He and Mucke team-mate Felix Rosenqvist continue to be inseparable this weekend and will share row two, with the Swede just edging out Max Verstappen. The top five positions will be the same for race three, based on second-fastest times.

Commanding race one winner Blomqvist could only manage sixth fastest ahead of Jagonya Ayam with Carlin stablemate Antonio Giovinazzi, and will start behind the Italian for race three.

Jordan King will be eighth for both races, while Jake Dennis and Nicholas Latifi both made the top ten on this occasion after problems left them at the back in the first qualifying session. Dennis could only manage 13th in the ranking for second-best times though, so Felix Serralles will join Latifi on row five for race three.

Fittipaldi coasts to victory in race one at Donington