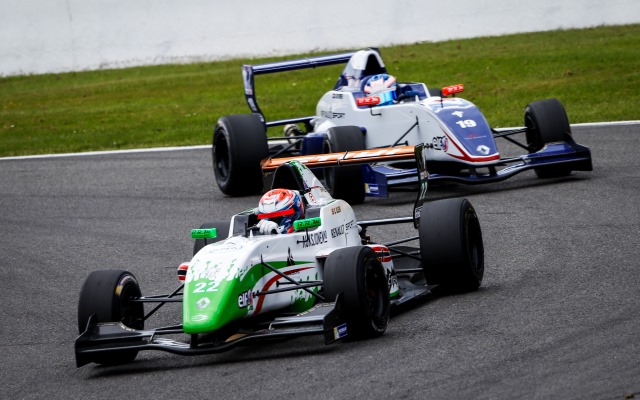 Dennis Olsen recorded his first ever victory in the Eurocup Formula Renault 2.0 after a fantastic drive in race one at Spa-Francorchamps.

In a field of 40 drivers, the Prema Powerteam rookie was able to take the lead early on from third on the gird. Despite an initial strong get away from pole man Nyck de Vries, Olsen used a slipstream to pass the Dutchman who went down to third temporarily before retaking the position from Levin Amweg.

There were a few early retirements with Steijn Schothorst flying off on the opening lap, while Matt Parry and debutants Jake Hughes and Louis Deletraz also failed to complete the first lap.

A safety car was then required for a crash involving Denis Korneev in the JD Motorsport car. At the restart, Olsen controlled the pack and held off the attempts of McLaren man de Vries and was able to come home in first with a gap of 1.955s.

With second place, de Vries extends his championship lead to ten points and it was a third straight third-place finish for Bruno Bonifacio who charged through from eighth on the grid.

The Brazilian passed Alexander Albon on the Kemmel straight to prevent the KTR man getting a podium but it was a good finish for him from sixth. Amweg, who had early on been second ended up in fifth with Tech 1?s Egor Orudzhev sixth.

Kevin Jorg spent the race gradually slipping back the way through the field after failing to build on his front row qualification. He finished seventh ahead of French duo Aurelien Panis and Anthoine Hubert. Koiranen?s Ignazio D?Agosto took the final points place after coming from 20th on the grid.