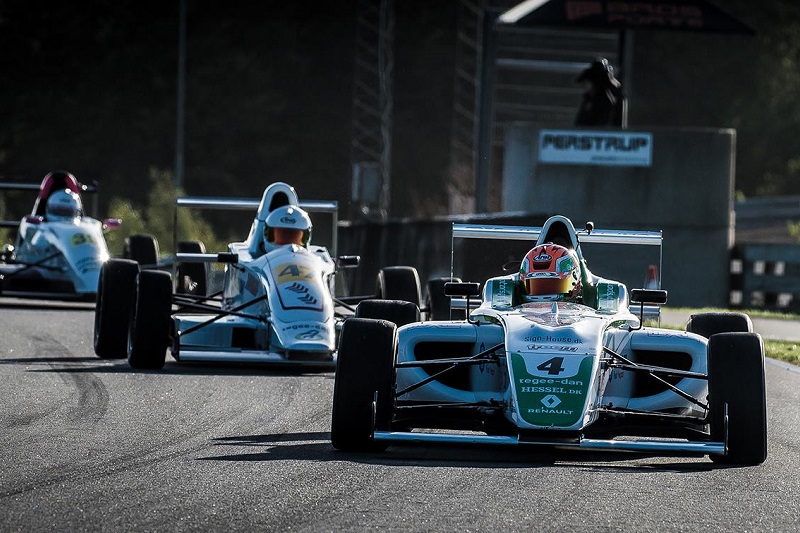 To many, the traditional Christmas market is one of Denmark’s greatest cultural exports. The spirit of bringing people together, spending money on local goods and crafts, and having a good time is one that resonates with people across the globe. Problem is, Christmas markets aren’t exactly accessible in the summer, so Formula Scout directs you to a joy Denmark can deliver all year round: racing.

The highlight of Denmark’s racing calendar, at least in our minds, is its Formula 4 championship. The newest of all the FIA-specification F4 championships, it was announced little over two years ago by the Dansk Automobil Sports Union. It utilises the same Mygale chassis as British F4, and a 2.0-litre Renault engine. The partnership with Renault extends to the name of the championship, and the top two in the championship get a prize Formula Renault Eurocup test.

Despite the Renault ties, what makes Danish F4 unique is that the grid also includes Formula Ford cars, which compete for the Formula 5 title. After finishing runner-up in F5 last year, Casper Tobias Hansen graduated to F4 with Team FSP and won the title. Formula Scout caught up with him during his prize Eurocup test at Barcelona to discover more about racing in his home country, and of course, how his season went.

Hansen’s 2018 sadly started with the death of his mother, but ended well with a triple win in the final F4 round, and his prize test.

“All in all it was a very, very good season. I lost my mother in the winter, so I wasn’t sure if I was going to drive or not. But at the end I took a decision and my father and me, we found the money a month or so [before the season]. It was crazy but we did it, and I was just focusing on winning really for my mum, it helped to just focus on that task.

“I made a few mistakes, but the luck has been on my side, and it was a fun season [to drive].”

“[Danish circuits are] different, for sure. They’re small, slow, but technical. One is very up and down, like really really up and down. There’s drivers here [in the Eurocup paddock] that would think: what the fuck. Sorry for my language! Smaller and slower makes some more fun, for some not.”

The airfield-based Padborg Park is the flattest, and is just over two kilometres long. It consists of two long straights and three 180° corners, and its outright lap record is under a minute. Jyllandsringen is a little longer, and Hansen set the outright lap record for the circuit this year. In the 1970s it held the Danish Grand Prix for Formula 3 cars. It?s incredibly twisty, but its popularity has made it the epicentre of Danish racing since the late ’60s.

The 1.75km Ring Djursland circuit is the most outlandish, and once lost its racing permit. It may look simple due to its small amount of corners, but its complexity comes from elevation changes and narrow sections. With the right car, jumping over some of the brows isn’t a rare sight. With the circuits being so short, the performance advantage of the F4 cars is marginalised.

“On some tracks the F5 cars may be quicker than the F4, because they have the same horsepower, but we weigh like 100kg or something more. And they have the same wings as us. In theory they should be faster. So sometimes we have a F5 car starting on pole, and me on second. But the F5 can’t start compared to the Formula 4. So we just go boom [past them at the start]. We do have to deal with some traffic now and then.”

F5 champion Mads Hoe won outright three times, with runner-up Martin Harritz also taking a win in the opening round of the season. Both also beat the F4 drivers to pole.

Having driven both classes of machinery, Hansen is the perfect man to describe the difference between the two on-track.

“The F5 has stick shift with a H-pattern. Very old style. We had to do a bleep [listening to the revs for changing gear] ourselves, and off the throttle on the up shifts. The F4 is easier to drive because it’s just paddle shifts, but it’s actually more fun, even if it’s a little bit slower, because you have two more gears [six to four].”

If budget allows, Hansen will move into the Eurocup next year, although the new-for-2019 car has made that step up more difficult. A sideways step into ADAC or Italian F4 is more likely. This year’s Eurocup runner-up Christian Lundgaard is a Renault junior and is one of Denmark’s rising stars. He’s also raced in Danish F4, and his brother Daniel was the inaugural champion in 2017.

“I was a guest driver for one round last year, and I ended up taking the points away from everyone else to help my brother win the championship,” explains SMP and Spanish F4 champion Lundgaard, who took a second and two fourths in his cameo.

“The only reason why I did it [just one round] was because I had two championships to focus on already. The Danish tracks aren’t really that big. We have some quite good tracks, Jyllandsring is definitely the best one. I’ve only raced on two tracks in Denmark. There’s rarely international racing [in Denmark] of course, but it’s nice to be back home with all the fans.”

Nielsen was one of the top karters in the world when he graduated to ADAC F4 in 2016, and with Neuhauser Racing team he finished a winless eighth in the standings, but did beat Prema’s Juri Vips and team-mate Felipe Drugovich to the rookie title.

At the same time he was still winning in karts, and finished third in the Audi Sport TT Cup. His obvious ability in sportscars was utilised again in 2017, where he won both of the Ferrari Challenge Europe races he contested, but his second ADAC F4 season faltered and resulted in only a two place improvement.

For 2018 he made the unusual step of switching full-time to sportscars, and competing in international karting on his free weekends. He won the World and European Ferrari Challenge titles with ease and finished second in the WSK Super Master Series in OK class karts, beating drivers backed by the likes of Red Bull and F1 world champions Fernando Alonso and Nico Rosberg. Regardless of the route they’re taking, Denmark’s car racing talents are headed to the top.