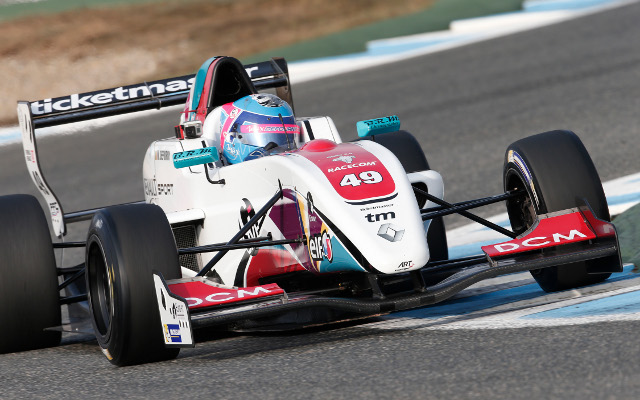 Max Defourny led Eurocup Formula Renault 2.0 title contender Anthoine Hubert by just one thousandth of a second in Friday’s running ahead of the deciding round at Jerez.

Unusually, the quickest times were set in the morning session on a green but cooler circuit.

Wildcard entrant Defourny, who finished his NEC campaign fourth in the standings as top rookie, set the day’s best time at 1m40.408s.

Hubert, who is fourth in the Eurocup standings and within 15 points of the lead, was just 0.001 seconds behind the Belgian.

Defourny’s ART Junior team-mate Ukyo Sasahara was third ahead of Simon Gachet and the ARTA Engineering duo of Amaury Richard and James Allen.

All of the top 10 with the exception of Sasahara have the benefit of having contested the Alps round at Jerez last weekend, when Hubert and Barnicoat won the two races.

Isaakyan set the pace in the afternoon session, when the track temperature was around eight degrees higher than in the morning.

Force India protege Jehan Daruvala was second ahead of Ignazio D’Agosto, Darius Oskoui and Barnicoat, who is fifth in the title race, 29 points down.

Dennis Olsen was sixth ahead of new Alps champion Jack Aitken, who is third in the standings, seven points down.

Louis Deletraz, who heads the standings with more wins than Jorg, was 26th out of 27 drivers in the morning session and 14th in the afternoon, leaving him 25th overall.