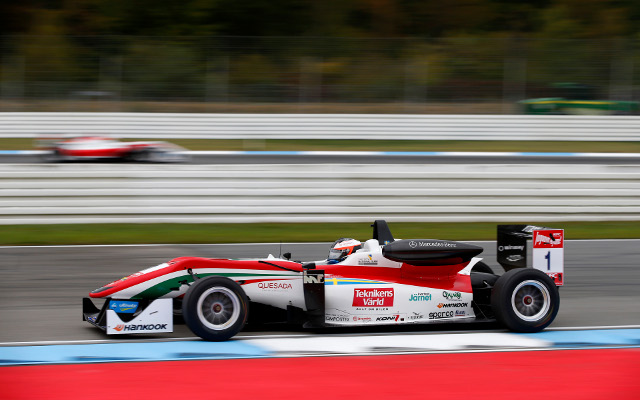 Maximilian Gunther will start his first race for Prema on the front row alongside FIA F3 European champion Felix Rosenqvist, who took another pole in qualifying at Hockenheim.

Rosenqvist was 0.348 seconds clear out front as he secured his 17th pole of the season.

Gunther had raced for Mucke Motorsport before leaving prior to the last round at the Nurburgring, and qualified third for all three of the races held at Hockenheim in May.

In his second appearance of the season with the new HitechGP squad, Alexander Sims led the session with five minutes remaining and ended up fifth as the best non-Prema driver.

Mikkel Jensen was sixth for Mucke ahead of Van Amersfoort’s Charles Leclerc.

Leclerc is just six points behind Antonio Giovinazzi in the battle for the championship runner-up spot – Giovinazzi will start directly behind the Monegasque driver in ninth with Markus Pommer eighth and Alex Albon 10th.

George Russell, who was second fastest to Rosenqvist in qualifying at the Nurburgring but took three 10-place grid drops for the races, was only 11th quickest, damaging his chances of repassing form rookie Stroll for fifth in the points.