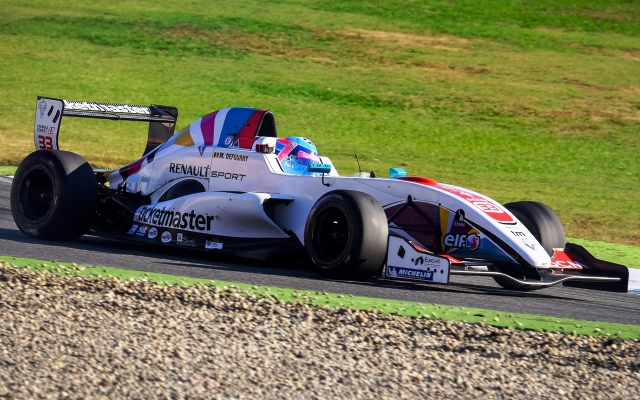 Defourny, testing with the same ART Junior Team with which he finished fourth in the 2015 NEC as top rookie, ended the day over half a second clear of Norris.

?After a year in Formula Renault 2.0, the objective is to improve both the car and myself as much as possible,” said the Belgian.

“Overall, it was a good day. We were able to work on the car and we were competitive in the afternoon. I have to do the same tomorrow as we prepare for 2016.?

MSA Formula champion Norris was running with the Josef Kaufmann Racing team alongside another leading NEC newcomer from this season, Jehan Daruvala, who had set the pace with the team on the post-season test day at Jerez last month.

“With this car, you have to be on the edge all the time,” said Norris.

“The main difference with the F4 concerns the tyres. You have to get the most out of the Michelins from the first lap but the transition is going quite well so far.

“The day went nicely. Until now, I had only done six or seven days of testing in the Formula Renault 2.0. I?m more and more confident with the car.

“To finish with the second best time is a good performance, although we have to find the half-second that separates us from the leader.”

Just three thousandths further back in fifth was New Zealander Marcus Armstrong with ART Junior. The top international karter is not due to reach the minimum age for FR2.0 of 16 until next July, four rounds into the Eurocup campaign.

Two of the other drivers testing for Tech 1 were the drivers that placed second and third in French F4 this year. Sacha Fenestraz was ninth while?Gabriel Aubry was sixth, just 0.004s behind Armstrong.

Also among the 19 drivers in action included Norris’ MSA Formula rival Enaam Ahmed with Fortec and Xavier Lloveras, the CIK-FIA Karting Academy Trophy runner-up, as one of four testers for AVF.

One team conspicuous by its absence from the test is Koiranen, the outfit that took drivers to the last two Eurocup titles.

*Morning session times were not released