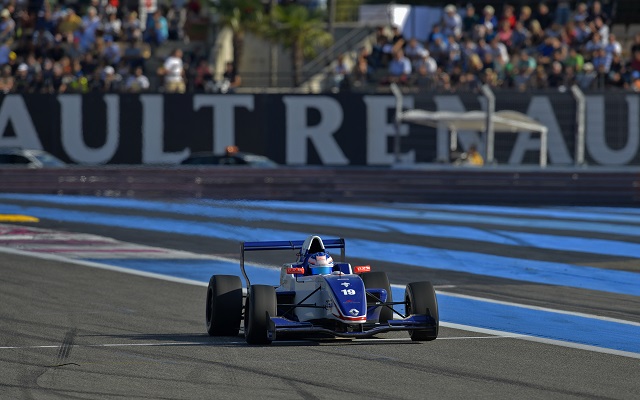 Koiranen GP’s Nyck de Vries became the 2014 Eurocup Formula Renault 2.0 champion after taking his fourth victory of the season in race two of the penultimate round at Paul Ricard.

De Vries picked up his second Formula Renault 2.0 title of the year, having previously secured the Alps championship in its penultimate round as well.

The Dutchman kept the lead off the line and controlled the race through a red flag restart and until the checkered flag.

The red flag in question was brought out after a number of incidents over the opening minutes of the race, which left several cars stranded on track and saw the medical car come out to attend to Josef Kaufmann Racing’s Ryan Tveter.

The race was then restarted under safety car and, when the green flag came back out, de Vries immediately began to pull away from the opposition.

The Koiranen driver would go on to build that gap up to nine seconds at the checkered flag as he celebrated his championship triumph.

Fellow front row starter Aurelien Panis ran the race in defensive mode, having to work hard to keep Tech 1’s Egor Orudzhev at bay. The Russian got close to an overtake several times, but had to settle for third behind the Frenchman.

Ignazio D’Agosto was a close fourth, while Steijn Schothorst fought his way up to fifth, recording his best finish of the campaign thus far.