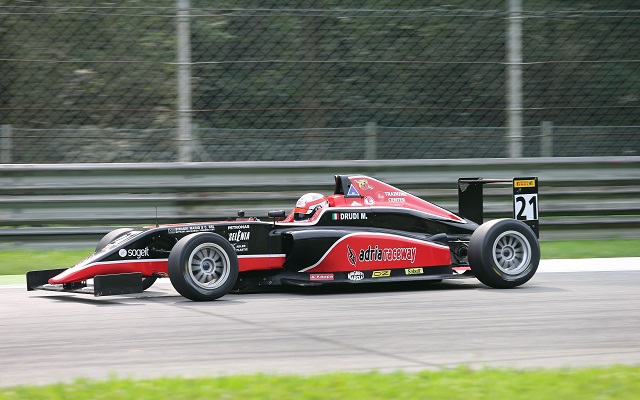 Mattia Drudi became the first driver in Italian F4 to pick up three race wins in a single weekend.

Drudi converted a front row start into his third victory of the penultimate round at Monza and his fourth in the series overall.

Poleman Brandon Maisano got a much better start off the line than the F & M racer, but his advantage was almost immediately neutralized due to a safety car.

Indeed, there was mayhem behind the duo as series champion Lance Stroll tried to overtake third-placed Joao Vieira off the line and ended up collecting an unsighted Sennan Fielding to his left.

The safety car didn’t stay out for long and, shortly after the restart, Drudi attempted a bold move on Maisano for the lead round the outside of turn one and succeeded.

From that point on, the Italian would be untouchable, managing his gap to Maisano and eventually taking the flag by 1.6s.

Maisano came under slight pressure from Vieira early in the race, but kept the Brazilian racer at bay before puling away from him. The Frenchman was within a second of Drudi in the final minutes, but couldn’t find the pace to make a challenge.

Vieira settled for third, running a comfortable race to secure his first podium in the category.

Alain Valente was fourth for Jenzer, while Diegi Motorsport’s Andrea Russo fought his way up from 18th on the grid to finish fifth, narrowly ahead of Matteo Desideri.

Robert Schwartzman managed a late overtake on compatriot Ivan Matveev to pick up seventh, with the latter settling for eighth. Leonardo Pulcini ran among the frontrunners in the early stages of the contest, but eventually tumbled down to ninth as Edi Haxhiu completed the top ten.