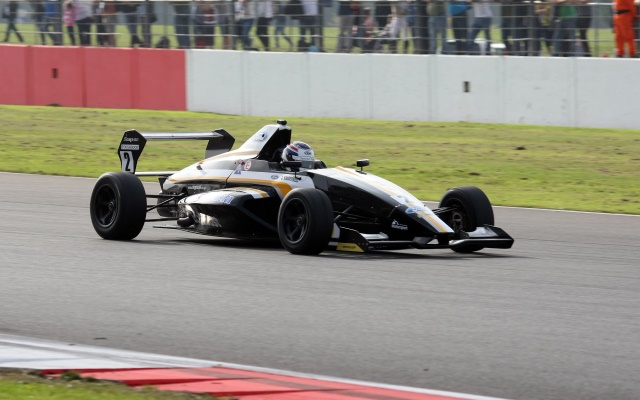 Jayde Kruger and Harrison Scott will go into the final Formula Ford round tied on points for the championship lead after finishing first and second in the third race at Silverstone.

Scott’s lead had been reduced from 13 to two points in the earlier second race, when he could only finish eighth after contact with Kruger caused him to spin.

In the final race, Kruger led away from pole position, with Scott passing Ashley Sutton for second place into Copse at the start of lap two. Scott would set the fastest lap as he cut the gap to Kruger to half a second, but the South African was able to respond and open up his lead to 1.6 seconds.

Scott held on to the fastest lap, giving him a crucial bonus point that stops him from falling behind Kruger in terms of points.

Sutton resisted pressure from Max Marshall to complete the podium – enough for him to tie on points with Marshall for third place in the standings.

Juan Rosso slowed and retired to the pits after running seventh early on. Ricky Collard had been due to start seventh, but was absent following a large accident for his father Rob in the British Touring Car Championship race earlier in the afternoon at Silverstone.