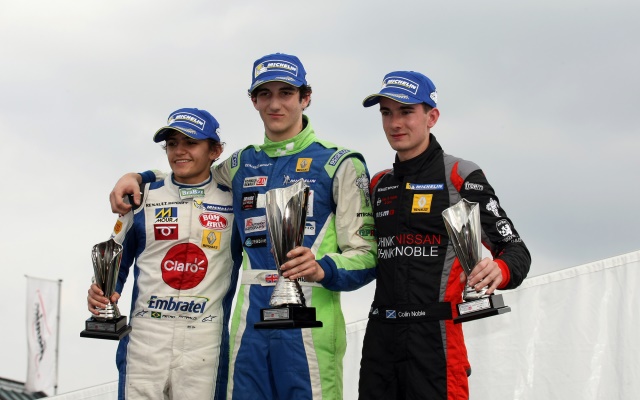 Piers Hickin secured second place in the Protyre Formula Renault standings with victory in the final race of the season at Silverstone.

Champion Pietro Fittipaldi led the first lap after starting on pole position, but was then passed at Copse by both Hickin and race one winner Colin Noble, with Matteo Ferrer and TJ Fischer also working their way past at Becketts.

Hickin would come under attack from Noble on the penultimate lap, but stayed ahead and claimed his second victory of the campaign by 0.6 seconds, as Noble narrowly held onto second place by 0.034s from a recovering Fittipaldi.

For the second race in a row, there was contact between MGR team-mates Fittipaldi and Ferrer as they fought over third place. Again, it was Ferrer who came off worst, sustaining a broken front wing as Fittipaldi completed a move on the outside line into Luffield.

Ferrer would drop to fifth before the finish as a result of the damage sustained, behind Fischer.

Contact between Patrick Dussault and Alex Gill as the latter made a late dive to the inside at Brooklands saw Dussault spin to the back, and caused Gill to lose two laps in the pits. SWB duo Michael Epps and Jack Butel picked up the pieces to take sixth and seventh respectively.