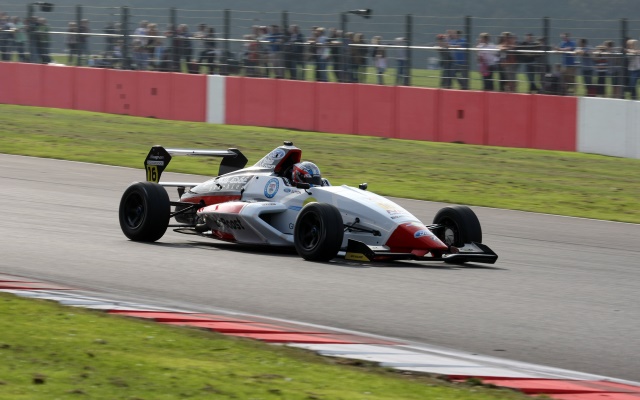 Starting fourth on the grid, Sutton made moves on the Radical duo of Juan Rosso and James Abbott on the opening lap while Collard opened up a decent margin of 1.7 seconds by the end of lap two.

Sutton then began closing that margin though and claimed the lead on the pit straight at the start of lap 10, going onto claim victory by two seconds and wrap up the Scholarship class for rookies. He confirmed afterwards that he plans to continue in the category as it becomes MSA Formula next year.

Collard would be bumped down to fourth by the finish behind Abbott and Kruger, who battled each other before and after passing Collard.? In the end, Abbott managed to hold on to second by just 0.097 seconds.

Rosso finished fifth ahead of Michael O’Brien and Louise Richardson. Scott finished up eighth after a spin at Brooklands on the opening lap following contact with Kruger, dropping him to the back of the pack. His points lead has now been slashed to two points with four races remaining.

Ovie Iroro and Greg Holloway completed the top ten, a lap down. Jessica Hawkins lost two laps in the pits, while Max Marshall, Chris Mealin and Clay Mitchell were eliminated after a third-lap incident at Copse.