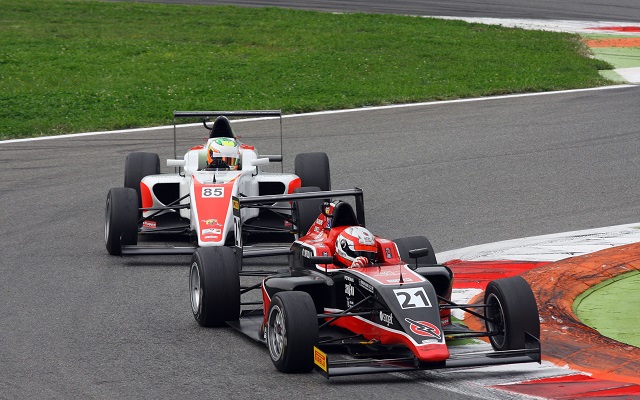 Mattia Drudi moved up from tenth on the grid to win race two of the sixth round of the 2014 Italian F4 season at Monza.

Ivan Matveev started on pole, but bogged down at the start. Andrea Fontana surged into the lead ahead of Alain Valente, while Sennan Fielding got a strong start from ninth and was up to third, ahead of Lance Stroll and Drudi.

Further behind, there was contact on the first lap between usual frontrunners Brandon Maisano and Andrea Russo, both drivers crashing out of the race.

Valente soon tried to outbrake Fontana into turn one, but went on to the grass on the outside, forcing the Italian driver to straight-line the chicane. Fielding took advantage and went into the lead.

Drudi passed Stroll and Valente on lap four, the Swiss driver also losing out to Stroll. An error from Fontana dropped him to fourth, into the clutches of Valente. The pair made contact at Ascari and Fontana was forced to pit for repairs.

Back at the front it became a three-way fight for the lead. Drudi made his move for first on lap six, making a late dive up the inside of Fielding into the first chicane. The Briton did not give up, harrying the Italian all the way to the line, but it was Drudi who came out on top for the third time this season.

Stroll took third, but there was a huge fight for fourth place behind them. Joao Vieira caught up to Valente and the pair switched positions several times over the course of a few laps, allowing Mahaveer Raghunathan and Robert Schwartzman to get into the mix as well.

At the Parabolica corner on the final lap, Valente made a bold move on the inside of Vieira, and the Brazilian went off into the tarmac run-off, ultimately finishing only seventh. Shwartzman also passed Raghunathan at the line to take fifth.