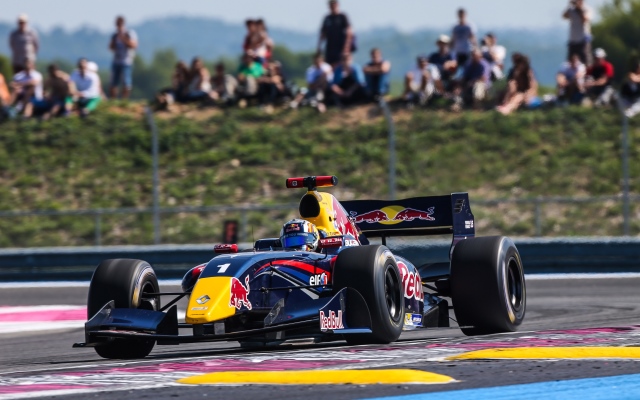 Carlos Sainz took a step closer to claiming the Formula Renault 3.5 title as he doubled up Paul Ricard thanks to a great start and dominant pace after that.

Sainz’s Red Bull Junior stable-mate Pierre Gasly started from pole for the first time on home soil as he aimed for a maiden win, but Sainz got the better launch and ensured that he got to turn one first.

Gasly out-braked himself and ran deep at the first corner, rejoining in front of Sainz before giving up the place.

As Gasly worried about defending from the cars behind, Sainz pulled away up front, making his mandatory pitstop fairly late compared to the other frontrunners, claiming the fastest lap by three tenths of a second on the penultimate lap and winning by 12 seconds.

Gasly scored his fourth consecutive podium – and his eighth of the season – in second place, ahead of fellow Eurocup graduate Oliver Rowland, who moved up from eighth to fifth at the start and then used an early pitstop and blistering pace in clean air after that to jump Roberto Merhi and Jazeman Jaafar.

Jaafar rejoined from his pitstop ahead of Merhi, but the Spaniard regained the position soon afterwards. Jaafar later tried to take the place back, but couldn’t complete the move around the outside of Merhi, who goes to the season finale at Jerez with a 44 point deficit to Sainz with only 50 left up for grabs.

Matthieu Vaxiviere got the jump on Sergey Sirotkin during the pitstops to take sixth, while Will Stevens, Nicholas Latifi and Will Buller completed the top ten.