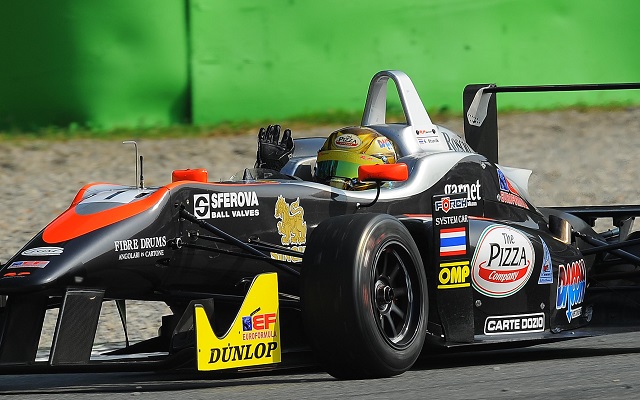 Thai racer Sandy Stuvik became the 2014 Euroformula Open champion after securing his tenth victory of the season in race two of the penultimate round at Monza.

Stuvik, who finished runner-up in the championship in 2013, took his sixth consecutive victory, finishing seven seconds ahead of the field at the checkered flag.

The RP Motorsport driver managed a clean getaway from pole and put in solid early laps to break the slipstream between him and second-placed Kevin Giovesi.

He then proceeded to escape further and further into the distance as Giovesi came under pressure from Artur Janosz and Christopher Hoher, who had had a slow from the front row.

Janosz overtook Giovesi for second after the opening laps, but couldn’t break away as the trio ran in formation for much of the race.

Giovesi finally tried a move into Variante del Rettifilo on the penultimate lap and made it stick, retaking second. Janosz stayed with him and returned the favour a lap later, but ended up nudging Giovesi into the gravel – and, as the Italian rejoined, he was also passed by Hoher.

At the checkered flag, Stuvik and Janosz completed an RP 1-2, while Hoher narrowly held off Giovesi to claim his first podium in the series.

Andres Saravia ran in fifth in the early stages of the race but then had a spin under pressure from Sean Walkinshaw. Walkinshaw himself was then overtaken by Yarin Stern, Yu Kanamaru and the charging Alex Palou.

The drivers fighting for fifth went three-wide into a corner and Stern was bumped into Palou, ruining his own suspension and giving the Spaniard a puncture.

Amidst the chaos, BVM Racing’s Damiano Fioravanti took fifth and maintained it until the checkered flag, recording his best finish of the season.

Saravia claimed sixth, while, in the fight for seventh, Kanamaru tried to put a move on Tanart Sathienthirakul into the Parabolica and ended up making contact and crashing himself into the barriers.

As such, Che One Lim was seventh, with Sathienthirakul recovering to eighth. Walkinshaw and Constantino Peroni rounded out the top ten.