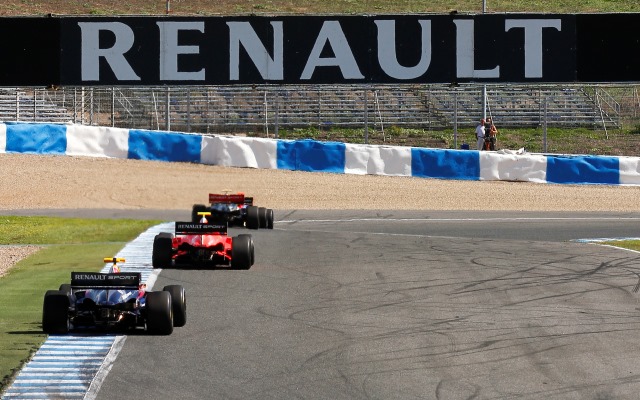 Nyck de Vries, Dennis Olsen and Dean Stoneman are among the drivers joining the Formula Renault 3.5 field for the first post-season test at Jerez on Tuesday and Wednesday.

Eurocup FR2.0 champion de Vries will test with DAMS, after revealing on Sunday night that he will race for the French squad in FR3.5 next season. The McLaren protege will test the #1 car as he follows in the footsteps of recent champions Kevin Magnussen and Carlos Sainz. The #2 car will be driven on both days by Jimmy Eriksson, a two-time race-winner in GP3 this season.

Eurocup runner-up Olsen will do both days of the test for Strakka Racing, who he drove for in FR2.0 on Monday afternoon. He will be joined on Tuesday by Nicholas Latifi, fresh from his second-place finish in the FR3.5 season finale on Sunday.

Latifi will then switch to the Charouz-run Lotus team for Wednesday’s running, alongside team regular Matthieu Vaxiviere and in place of GP3 racer Alex Fontana, who will drive on Tuesday.

Stoneman, who rose to second in GP3 standings after a win and a second place in Sochi last weekend, will drive for Arden on day one and Pons on day two. European F3 frontrunner Jordan King will drive the other Arden car on both days, while Stoneman’s place will be taken on Wednesday by FR2.0 racer Egor Orudzhev.

SMP-backed Orudzhev will turn out for Fortec on the first day. Italian driver Luca Ghiotto will switch from Draco to Fortec for both days of the test, and be joined on the second day by Jazeman Jaafar, who has two seasons in FR3.5 under his belt with Carlin and ISR.

Ghiotto is replaced at Draco by his former FR2.0 team-mate Bruno Bonifacio, who steps up to join fellow Brazilian Pietro Fantin at the team owned by Guto Negrao.

Stoneman will partner Oscar Tunjo at Pons. The Spanish team confirmed on Monday that Tunjo will race for them again in 2015, after the two parties signed a two-year deal when the Colombian joined them earlier this season. In Stoneman’s seat at Pons on Tuesday will be GP3 driver Robert Visoiu, who had previously tested for the team in pre-season.

FR2.0 veterans Gustav Malja and Andrea Pizzitola will test for ISR on both days, while Slovakian Richard Gonda is the sole driver entered so far by Tech 1.

Fresh from her fifth place finish on Saturday, Beitske Visser will continue with AVF for both days, with no team-mate yet announced. Her compatriot Steijn Schothorst is entered for the first day with Comtec, who skipped the final round of the season due to a lack of drivers.