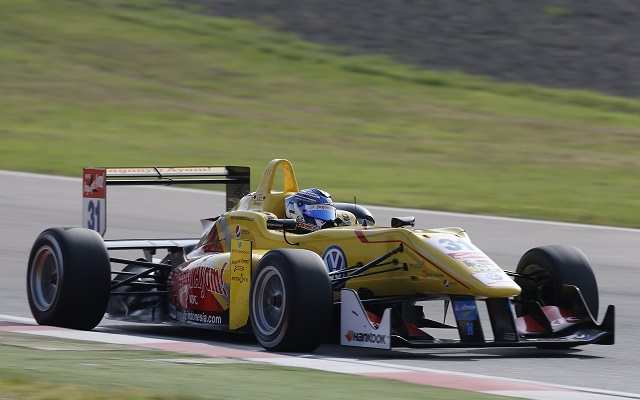 Blomqvist drove a controlled race from pole to claim his fifth win of the year, while Verstappen battled his way up to runner-up from 11th on the grid, having served the final of his three ten-spot grid drop penalties.

While Blomqvist was pulling away from Giovinazzi out front, Verstappen began climbing his way through the field. He was eighth after lap one, soon cleared Jake Dennis for seventh and overtook Will Buller for sixth shortly thereafter.

Meanwhile, points leader Ocon was not having it all his way as he came under pressure from teammate Antonio Fuoco, who then found his way past the Frenchman.

As the race leader pulled out a three-second gap in the early stages, he would soon find himself having to do it all over again as the safety car came out for the beached car of Alex Toril.

The top three stayed in position after the start, but it was Verstappen who was setting the pace behind – the Dutchman cleared Nicholas Latifi right away for fifth and then overtook Ocon round the outside into Variante Tamburello to bring himself back into championship contention.

The soon-to-be F1 racer would then inherit a podium spot when a slow puncture for Fuoco ruled the Italian out of contention, much to the chagrin of the local fans.

In the closing stages of the race, as Blomqvist was back to leading comfortably and eventually took the checkered flag in first, Verstappen began quickly gaining on Giovinazzi and managed to beat the Carlin man to the line by 0.02s of a second on the final lap.

Ocon settled for fourth, while Lucas Auer picked off Latifi to claim fifth, having fought his way up from ninth after the opening lap.

In the standings, Ocon now leads with 439 points to Blomqvist’s 455 and Verstappen’s 443. Both of them will need to significantly outscore the Frenchman in the final Imola race to keep the title fight going as there will be just 75 points left up for grabs coming into the final round.