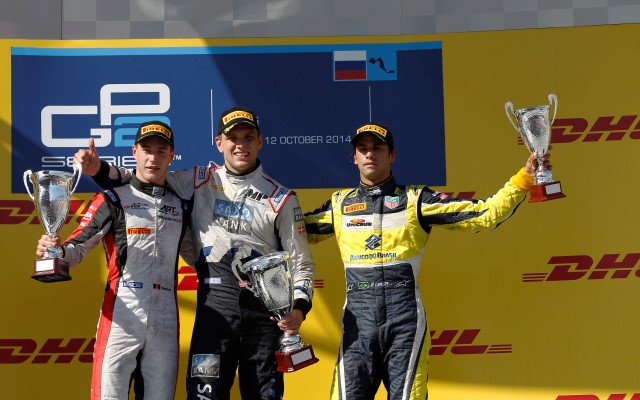 Marco Sorensen delivered his and MP Motorsport’s first GP2 victory in the sprint race of the Sochi weekend.

An eventful start of the race saw Sorensen keep first while Stoffel Vandoorne took second after passing Sergio Canamasas, however, the Belgian chose to give up second place after running off track.

Julian Leal had a storming start to get into fourth from ninth on the grid, only to lose his place due to a drive-through penalty for gaining an advantage by leaving the track.

Felipe Nasr also found himself at the sharp end after a great getaway, while it all went wrong for newly-crowned Jolyon Palmer, who dropped down the order after making contact with Raffaele Marciello.

As the race went on, Vandoorne put Canamasas under big pressure, however, the Belgian was unable to make a move on the Spaniard. Finally on lap 12, Canamasas was forced to retire due to possible mechanical issues.

A couple of laps later the safety car was required because of contact between Marciello and local driver Artem Markelov that left the Italian crashing out with a puncture.

The race restarted with two laps to go and Sorensen was able to keep the lead with Vandoorne having to settle with second.

Nasr passed Mitch Evans on the penultimate lap to complete a fantastic recovery race after starting from 17th. Arthur Pic also gained a position after the safety car, leaving Andre Negrao in sixth.

Kimiya Sato finished seventh to celebrate his first points in GP2, while the final point-scoring position went to the impressive Stefano Coletti, who improved 16 positions during the race.

Nathanael Berthon took ninth, while an eventful race for Palmer saw him rounding the top ten out.