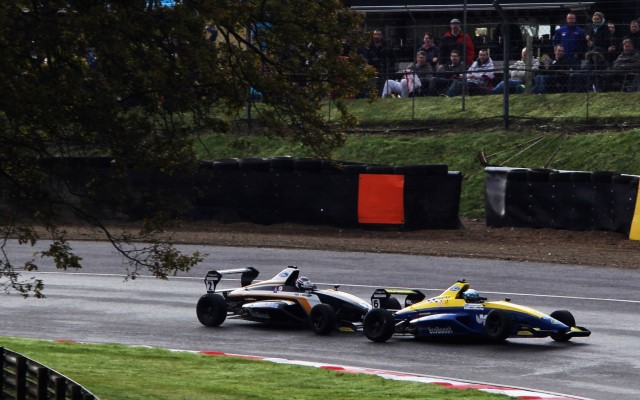 Controversy surrounds the conclusion of the final ever British Formula Ford championship season after title rivals Jayde Kruger and Harrison Scott made contact in race two of the series finale at Brands Hatch.

Victory in race one had given Scott an eight-point lead over his rival, and he went from fourth to second at the start of race two in damp conditions, following reverse grid pole-sitter Kruger.

At the end of the opening lap, Kruger ran wide, allowing Scott to have a go at taking the lead at the start of lap two. But there was contact between them at Druids that damaged Scott’s suspension and forced him to retire.

Kruger would go on to win the race, but was later penalised for causing the incident. His JTR team appealed that decision however, so the original result stands provisionally for now and Kruger takes a 22-point lead into the final race. Scott starts second on the grid for that one, with Kruger sixth.

Max Marshall finished second while Ashley Sutton came through to third place from the back of the grid, with his decision to go for slick tyres working out in the end.

Michael O’Brien scored his best result of the season in fourth ahead of Ricky Collard and Clay Mitchell, who had taken third place away from Collard earlier in the race before an error cost him ground.

Radical team-mates Juan Rosso and James Abbott were seventh and eighth, and the top ten completed by Jack Barlow and Louise Richardson.