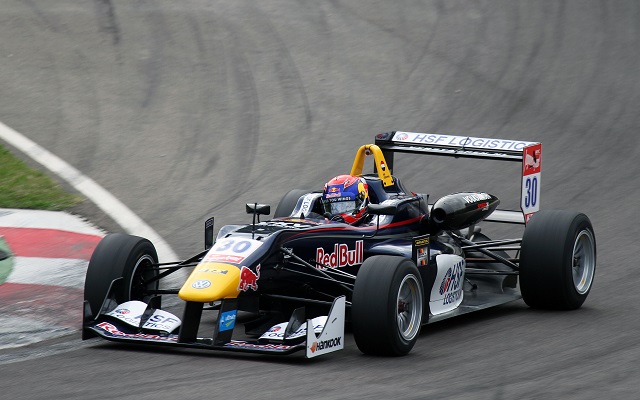 Van Amersfoort Racing’s Max Verstappen saw off Prema Powerteam’s Antonio Fuoco to take victory in race three of the FIA F3 round at Imola, which did not stop another Prema driver Esteban Ocon from securing the drivers’ title a round early.

Verstappen started from pole but was somewhat slow off the line, having to move to the right to cover Ocon. This allowed third-placed Fuoco to move to the left and, as the three drivers went side-by-side into turn one, it was the Italian who emerged in the lead, with Verstappen squeezing Ocon to keep second.

Further on in the lap, Carlin’s Ed Jones collided with teammate Antonio Giovinazzi as multiple cars skipped through the gravel. With Jones off in the gravel and Giovinazzi losing his left-rear tyre, the safety car was deployed.

The marshals didn’t take long to clean up the track but, shortly after the race was restarted with the top drivers staying in position, the safety car had to come out again as Sandro Zeller went off in the gravel.

Verstappen then managed to perfectly time the subsequent second restart and pulled off an audacious move on Fuoco around the outside into Variante Tamburello to claim the lead.

The Red Bull junior driver proceeded to storm off into the distance and, while there was yet another safety car as Jordan King and Felix Rosenqvist came to blows, it did not do much to liven up the fight for victory.

With all the stoppages, the race ran to time and saw Verstappen take the checkered flag after 17 laps.

Another Prema driver Nicholas Latifi took fourth after clearing Tom Blomqvist on the opening lap, with the Brit settling for fifth place.

Will Buller fought past Jake Dennis to claim sixth, while the RSF-backed Carlin driver kept Lucas Auer at bay for seventh.