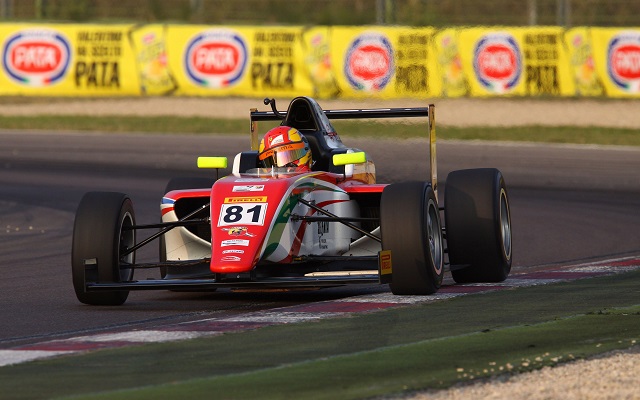 Prema driver Brandon Maisano took a dominant victory in the final race of the 2014 Italian F4 season at Imola.

It was a relaxing Sunday drive for the 21-year-old Frenchman, who started from pole, took the fastest lap and led all 17 laps of the race. It was the former Ferrari junior’s fifth win of the season.

Behind him though, it was all to play for. Leonardo Pulcini got the jump on Mattia Drudi?for second at the start, and the DAV racer held off Drudi’s advances for most of the race. It was only on the penultimate lap of the race that Drudi managed to get past with a late-braking move at the Variante Bassa.

Robert Shwartzman, Edi Haxhiu and Shinji Sawada completed the top ten, the Japanese driver taking his first point in the series in the process.

Euronova’s Sennan Fielding, who won race two, had a torrid afternoon. After losing several places due to a slow start, he had damage whilst battling with Matteo Desideri, an incident which saw the Italian retire from the race.

Fielding’s pace dropped significantly thereafter, and he later collided with Jonathan Giudice, both drivers being forced to retire as a result.