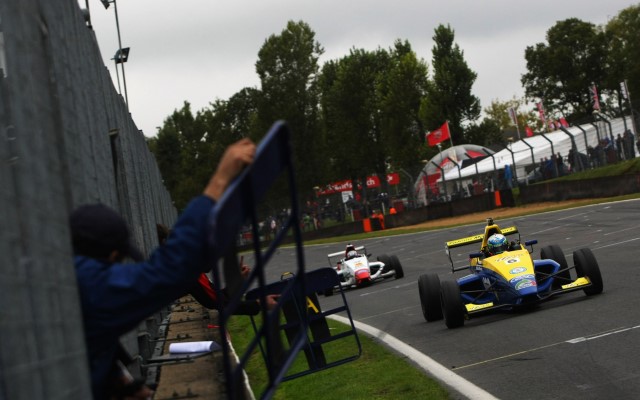 Harrison Scott drove to victory in the final ever British Formula Ford series race at Brands Hatch, but eighth place was enough for his season-long rival Jayde Kruger to provisionally secure the 2014 title.

Scott took the lead from pole-sitter Ashley Sutton when the MBM driver ran wide on lap two, and claimed victory by half a second – the chequered flag being waved just before the race time expired as rain began to fall heavily.

Kruger lost two places from sixth to eighth at the start, and after trying and failing to get back past Louise Richardson he backed off and settled for eighth, knowing that a top ten finish was sufficient.

He finishes six points ahead of Scott in the final standings, pending an appeal against the results of race two when he and Scott made contact while fighting for the lead, causing Scott to retire.

Ricky Collard took third place, benefiting from off-track moments by Max Marshall and later James Abbott. Marshall was running fourth behind Abbott when he lost out in a fight with Juan Rosso – Collard benefiting to take both places. Abbott would then fall to sixth behind Rosso and Marshall when he slid wide at Graham Hill Bend.

Richardson, Kruger, Chris Mealin and Jack Barlow completed the top ten finishers – the latter surviving contact with Clay Mitchell, who would finish a lap down after finding the gravel late on.