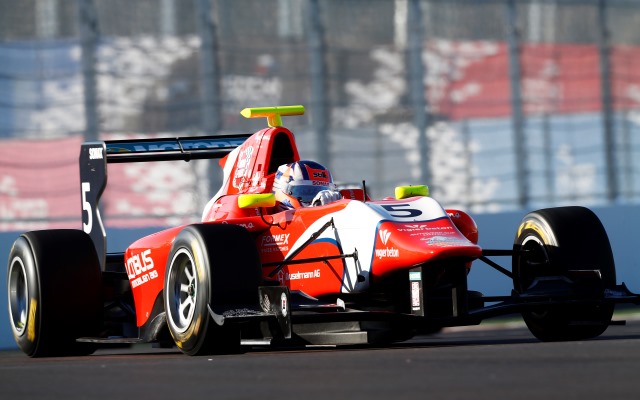 Patric Niederhauser held on in a phenomenal last lap to win an eventful second GP3 race in Sochi, as Dean Stoneman finished second to take the title fight to the Abu Dhabi finale.

The race was red flagged on the first lap after a big crash at the first corner. Alex Fontana had been squeezed between the Koiranen cars of Jimmy Eriksson and Stoneman, wiping out both front corners of his car. He was collected from behind by Riccardo Agostini, and as both cars went straight ahead at the sweeping right-hander, Pal Varhaug and Richie Stanaway were both collected.

Pole-sitter Niederhauser led his Arden team-mate Jann Mardenborough at the restart, while Lynn lost out to both Marvin Kirchhofer and Stoneman – two drivers who could stop Lynn wrapping up the title with a round to spare.

Niederhauser seemed comfortable up front until a late safety car triggered by the stopped car of Nikolay Martsenko. Just two laps remained when the race restarted, and Kirchhofer used the first of those to close right up on Niederhauser. Meanwhile, Kirchhofer and Stoneman passed Mardenborough, who briefly also slipped behind Lynn but managed to regain fourth place.

The Swiss driver managed to hold on though to score his second win of the year, as Stoneman missed out by just 0.3 seconds on becoming the second ever double race winner in GP3, capping a remarkable weekend after his late switch from the absent Marussia Manor team to Koiranen.

With Lynn finishing back in fifth behind Kirchhofer and Mardenborough, his points lead was cut by Stoneman to 47 points, with 48 available in Abu Dhabi. Losing a place on the last lap means Kirchhofer is 50 points behind and therefore now out of contention, as are Erikssson – who was 16th after a drive-through penalty for causing the first-lap incident – and Stanaway.

Nick Yelloly finished sixth ahead of Status team-mate Alfonso Celis, who got his first points in the series. Emil Bernstorff took the final point in eighth from the back of the grid, with Patrick Kujala and Robert Visoiu completing the top ten.