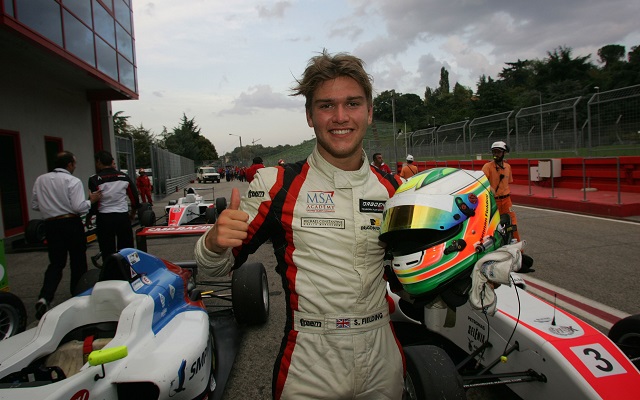 Euronova driver Sennan Fielding held off the advances of Ivan Matveev and Brandon Maisano to secure his first win of the 2014 Italian F4 season in the final round of the championship at Imola.

The 18-year-old BRDC F4 frontrunner started from reverse-grid pole after having been demoted to tenth in the first race for causing an avoidable collision.

As the lights went out, Fielding had a good getaway, while Cram driver Robert Shwartzman stalled right behind him.

Further down the field, Mattia Drudi and Matteo Desideri came to blows at the Tamburello chicane, both drivers retiring on the spot.

Maisano was the biggest mover of the first lap and was up to fourth from tenth on the grid at the start of lap two. He soon passed Lucas Mauron, who lost another place to Fielding’s teammate Andrea Fontana on the following lap.

Prema driver Maisano began putting pressure Matveev, and, having passed him at Tamburello on lap eight, lost no time in harrying Fielding for the lead.

However, on the last lap, he tried to make a move stick around the outside of the Briton at Tosa in vain, and Matveev managed to snatch second place back at the next corner, which he kept to the line.

Fontana and Mauron were fourth and fifth, with F & M driver Mahaveer Raghunathan finishing sixth. Italian driver Andrea Russo managed to move up from 20th to seventh in the race, making several passes including a double overtake on his teammate Joao Vieira and Israeli driver Bar Baruch.