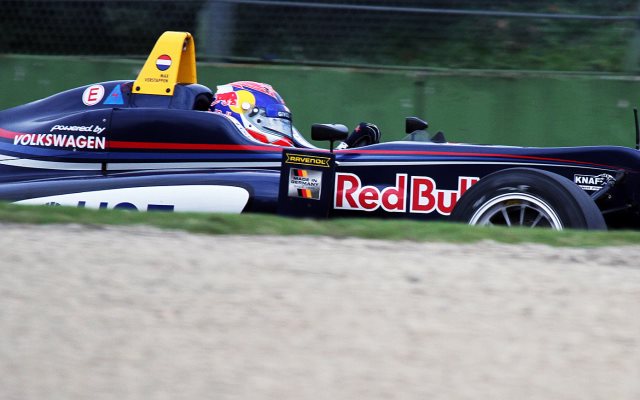 Max Verstappen bounced back from a difficult opening race at Imola to top the second qualifying session at the Italian circuit.

The future Toro Rosso F1 driver finished up three tenths of a second clear at the top of the times when the session was ended early following a heavy crash for Ed Jones. The Emirati, who suffered a back injury at Pau earlier in the year, required extracting from the car and fading light meant the session was not restarted with seven minutes left on the clock.

The last of his three ten-place grid penalties for a Nurburgring engine change means Verstappen will have to start back in 11th for the first race, but he will begin the weekend finale from the front courtesy of second-fastest times.

Fifth fastest was Antonio Fuoco ahead of an impressive Will Buller on Signature’s F3 return weekend. He will share the third row of the grid with Nicholas Latifi, with Jake Dennis and Roy Nissany following that. Lucas Auer was tenth fastest, while T-Sport Nick Cassidy will move up onto the fifth row alongside the Austrian courtesy of Verstappen’s penalty.

Championship leader?Ocon will join Verstappen on the front row of the grid for race three ahead of Fuoco, Blomqvist, Buller and Latifi. Behind that will be?Felix Serralles, Jake Dennis, Jordan King and Antonio Giovinazzi.