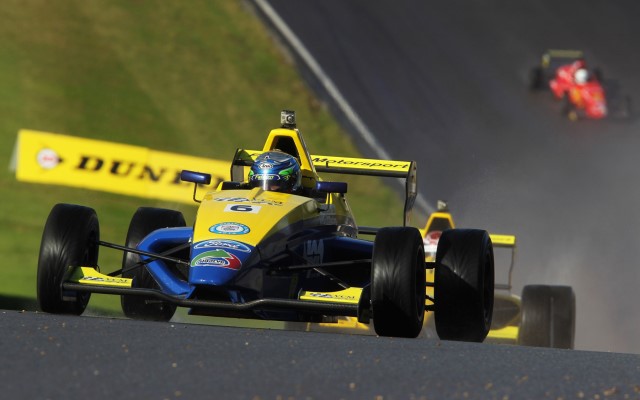 Harrison Scott has taken an eight-point lead in the Formula Ford standings with two races to go after ending his win drought in race one of the season finale at a damp Brands Hatch.

Tied on points with Jayde Kruger coming into the deciding weekend, Scott fell behind Kruger at the start when the South African made a rocket start to go from sixth to second at the start.

Kruger however then slide wide at Graham Hill Bend, allowing Scott to re-pass him and then falling down to fifth. Scott would get another gift on lap four when Ashley Sutton threw away a five-second lead with an off into the gravel at Paddock Hill.

The safety car came out and when it went back in again, there was just one lap of racing remaining due to another Paddock Hill incident involving?Ovie Iroro. Scott led his Falcon team-mate Ricky Collard to the chequered flag to collect his first win for 15 races.

Juan Rosso returned to the podium in third, ahead of Kruger. James Abbott was fifth ahead of Louise Richardson and Michael O’Brien. Chris Mealin took eighth after last lap contact with Jack Barlow and Max Marshall, who both pitted with damage and allowed Greg Holloway to take ninth.