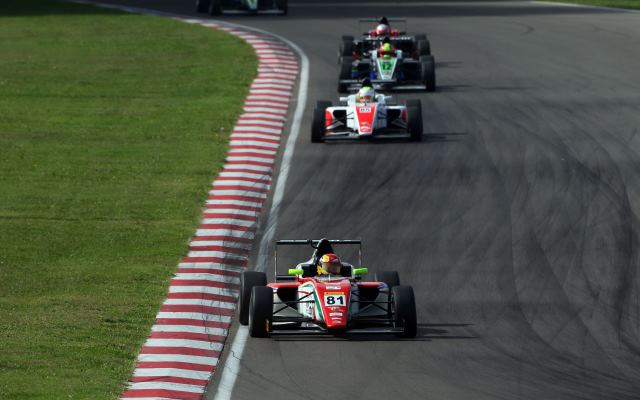 French driver Brandon Maisano took a commanding victory in the first race of the final weekend of the 2014 Italian F4 season at Imola.

The 21-year-old, who is Prema’s sole entrant for the weekend, maintained his lead from the start and was never challenged, winning the race by over 12 seconds.

Euronova’s Sennan Fielding took his third podium finish in four races in the category, but the race was far from straightforward for him. After getting a strong start and moving up two places from fourth, he was harried all the way by Italian driver Mattia Drudi.

On lap ten, Drudi dove down the inside of Fielding at the Tamburello chicane, but the two collided, sending the F & M driver into a spin, which dropped him to seventh. Fielding lost second to Antonelli’s Joao Vieira, and in a bid to keep the other Antonelli of Andrea Russo behind, he cut across the track and damaged the Italian’s front wing.

Vieira ran off at Acqua Minerali shortly afterwards, promoting Fielding back to second, which he kept to the flag. He was followed home by teammate Andrea Fontana.

Lucas Mauron, Robert Shwartzman and Ivan Matveev completed the top ten, whilst Russo, whose broken wing came off on lap 11, was disqualified?on the final lap for ignoring black-and-orange flags.

Update: Fielding was given a 25-second penalty, dropping him to tenth.