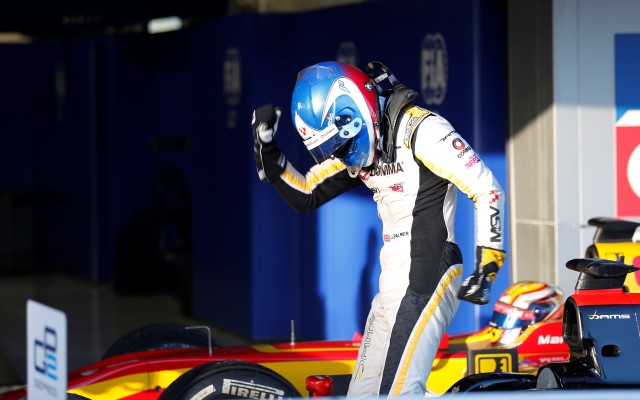 Jolyon Palmer claimed the GP2 feature race win in Sochi that he needed to secure the title with three races to go.

With a 41-point lead coming into the race and 65 left up for the grabs after today, Palmer needed to win the race and have rival Felipe Nasr fail to score points in order to wrap up the crown.

Things looked good for Nasr early on when he went from 12th on the grid to seventh on the opening lap, even as Palmer gained two places from fourth to second.

But stewards then determined that Nasr had gained an advantage by going off track at turn two on that first lap, having been forced into the run-off by contact. He was handed a drive-through penalty, which he needed to have two attempts at serving after the first came under a safety car, which is not allowed. The Brazilian finished down in 18th place.

Qualifying surprise package Takuya Izawa got a fabulous start to take the lead off the line from third on the grid, but he was out-done on the brakes for turn two by his ART Grand Prix team-mate Stoffel Vandoorne, who reclaimed the lead after starting on pole.

Izawa would then slip back to fourth before the end of the first lap, behind Palmer and front row starter Arthur Pic.

The safety car was needed on lap eight when Stefano Coletti crawled to a halt. With Pic and others already having made his pitstop, it was imperative for the leaders to also stop before the field bunched up. Vandoorne pulled into the pit entry but then continued on the track, while Palmer and others behind him came in.

That left Vandoorne leading the safety car queue with top early stopper Palmer not far behind him in the queue. But after the restart the McLaren junior was phenomenal, setting consecutive fastest laps on his worn soft tyres and opening up a 15-second lead by the time he pitted with four laps left.

Palmer had been held up behind Artem Markelov and others, but was released into clear air when the Russian stopped, albeit with Mitch Evans just 0.4 seconds behind. Evans had actually passed Palmer at the safety car restart, only to lose the place a few corners later as they fought in the pack.

Evans applied the pressure on Palmer in the remaining laps, but the DAMS driver did enough to win by 1.2 seconds.

Raffaele Marciello was a distant third, delivering a podium finish for the Ferrari Driver Academy after a difficult week. He sealed the place after needing a couple of attempts to get past Pic at the restart – the first of which saw them running each other wide at the penultimate corner.

Vandoorne rejoined from his stop in seventh but would finish fifth, setting the fastest lap on the final tour and finishing just half a second behind Pic.

Andre Negrao and Sergio Canamasas capitalised on their top ten starts to stay out of trouble and finish sixth and seventh respectively ahead of Julian Leal, who had started 19th. Marco Sorensen dropped a couple of places late on and finished ninth ahead of Nathanael Berthon.

Update: Stewards penalised Leal for colliding with Sorensen, switching their positions and giving Sorensen reverse-grid pole for the sprint race. Stephane Richelmi had 20 seconds added to his time for a track limits infringement dropping him to 22nd.