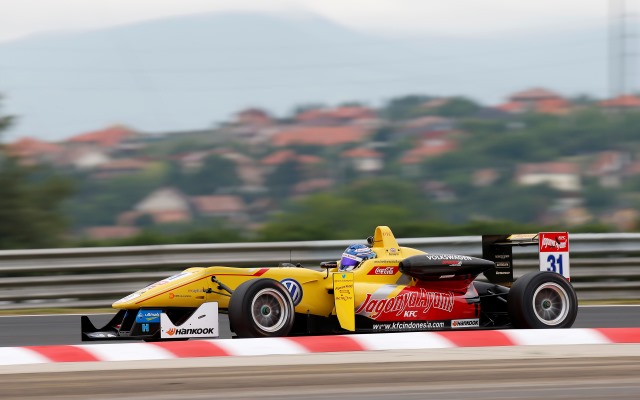 Tom Blomqvist capitalised on a poor start from Esteban Ocon to score a commanding victory in race one of the FIA F3 European Championship round at the Hungaroring.

Points leader Ocon started from pole for the sixth time this season but bogged down off the line, dropping down the order as the fast-starting Blomqvist and Max Verstappen moved ahead.

Blomqvist forcefully held onto the lead at turn one, and Ocon managed to recover from his bad getaway to take second place away from Verstappen.

Ocon stayed within a second of Blomqvist for a few laps but the Briton then began stretching his lead, sometimes more than a second a lap faster.

After backing off slightly at the end, following a late warning for exceeding track limits, Blomqvist took victory by 4.9 seconds to join Ocon on three wins for the season and cut the gap slightly at the top of the standings.

Verstappen lost third place when he slowed and retired to the pits with a car problem, allowing Pau Grand Prix winner Felix Rosenqvist to make the podium under pressure from Mucke Motorsport team-mate Lucas Auer. Jordan King finished in fifth.

Blomqvist’s warning for track limits following a host of penalties being handed out to other drivers. Those affected included Antonio Fuoco and Gustavo Menezes out of sixth and seventh places. With Antonio Giovinazzi having to earlier concede eighth place due to a broken front wing, Jules Szymkowiak?inherited a superb sixth place finish, improving considerably on his previous season-best of 14th.

Felix Serralles, Dennis van de Laar, Mitch Gilbert and Sean Gelael made up the final points places. After contact in qualifying forced him to start 24th, Jake Dennis just missed out on a point in 11th.