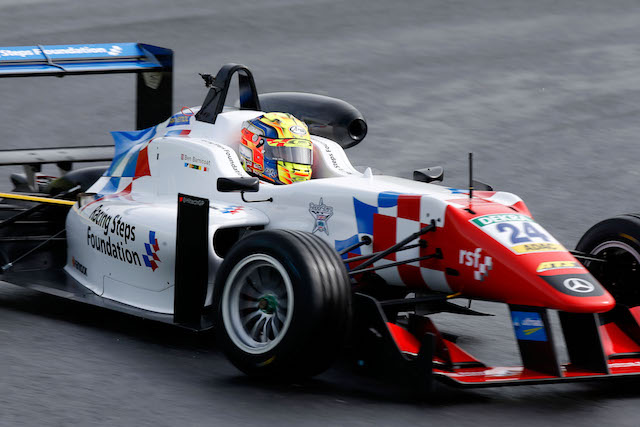 In a race that began behind the safety car, Barnicoat started from sixth but gained a place when the race got underway for real and Nick Cassidy spun at the final corner.

That released Russell to catch poleman Gunther, and the Briton launched a move down the inside of Turn 11. He got his nose ahead and seemed to have the move done but drifted wide of the apex in the tricky conditions and banged wheels with Gunther, who was sent straight on into the barriers.

Russell pitted with front-left damage, promoting team-mate Barnicoat into the lead as the safety car came out to recover Gunther’s car.

After that he was never troubled, winning by five?seconds as he secured the first victory?for the HitechGP squad.

Joel Eriksson?claimed a second place finish that puts him third in the championship behind Gunther and?Lance Stroll, who finished third.

Race one winner?Ralf Aron was caught out by the conditions on his way to the grid and did not take the start.

Dillmann on pole again after Vaxiviere has lap deleted

Dillmann holds off Nissany to win at wet Hungaroring