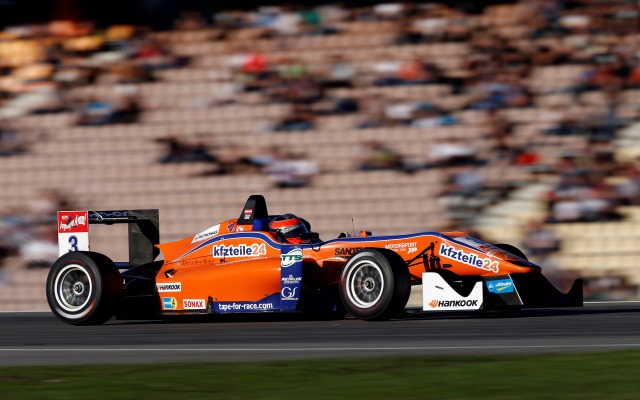 Lucas Auer scored his third win of the FIA F3 European Championship in the 33rd and final race of the season at Hockenheim.

Auer took the lead after a thrilling first-lap duel with pole-sitter Tom Blomqvist. Auer tried to hold on around the outside of Blomqvist into turn one but was forced wide. He then nosed ahead into the hairpin, only for Blomqvist to claim the advantage on the inside line. Auer finally grabbed the lead at turn ten, before the safety car was deployed for a hairpin incident further down the order.

Auer opened up a lead after the restart, claiming victory by three seconds.

Blomqvist spent the rest of the race under attack from his Carlin team-mate Jordan King. King had a fine first lap that saw him pass Antonio Giovinazzi and Felix Rosenqvist, and eventually overtook Blomqvist at the hairpin on the very last lap – the Carlin duo perhaps making contact in the process.

Third for Blomqvist was enough for him to secure second place in the drivers’ championship ahead of Max Verstappen. Rosenqvist and Giovinazzi completed the top five finishers.

Starting seventh, Verstappen overtook his rival Esteban Ocon on the first lap, only to throw that position away again when he ran well wide at the final corner on the safety car restart.

He would recover though to launch another attack on Ocon later in the race. The pair interlocked wheels as they rounded the kink between the hairpin and the Mercedes Arena, before Verstappen claimed the place on the inside line at the next corner.

The close fight between the rookies was a fitting end to a brilliant season-long duel between them, even if it was lower down the order than they might have liked.

Sean Gelael took eighth and Ed Jones ninth, while Dennis van de Laar scored the final point in tenth. Jake Dennis had got up to tenth from the back of the grid, but lost the place on the final lap.