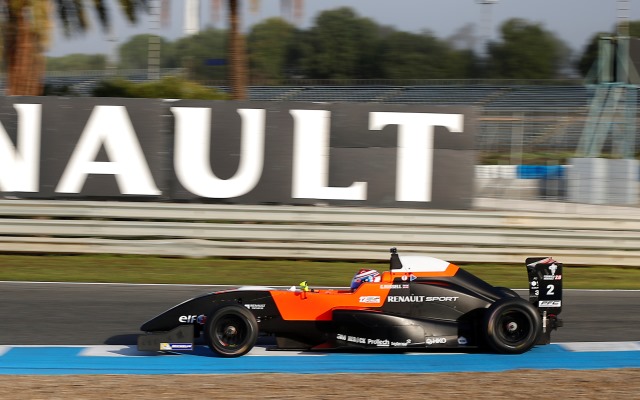 Eurocup Formula Renault wild card driver George Russell stunned the field of series regulars by taking victory in the final race of the 2014 season at Jerez.

The 16-year-old Brit led from lights to flag in what was his fourth race in the series, delivering 2013 team champions Tech 1 Racing’s first win of the campaign.

After lining up on pole, Russell made a smooth getaway from his grid slot, keeping the lead into turn one. Meanwhile, fellow front row starter Alex Albon found himself bogged down, slipping behind Nyck de Vries into turn one and then running wide to lose two more spots.

Two laps into the race, Russell established an 0.8s lead over the series champion, but it was then cancelled out by the safety car coming out when Martin Rump collided with Egor Orudzhev in the fight for P11.

The restart followed a few minutes later and, at the line, the more experienced de Vries managed to keep up with the race leader, almost trying for an overtake into turn two. However, Russell withstood the barrage and soon pulled out a one-second lead over the Koiranen driver.

From that point on, it was a straightforward race for the wild card entrant, who ended up finishing 1.6s ahead of the series champion. Behind them, Jack Aitken was a close third, having overtaken Kevin Jorg after the restart.

Jorg had a number of cars right behind him during the latter stages of the race, but managed to hold on to second, leading Alex Albon, Matt Parry and Dennis Olsen, who secured the runner-up spot in the drivers’ championship.