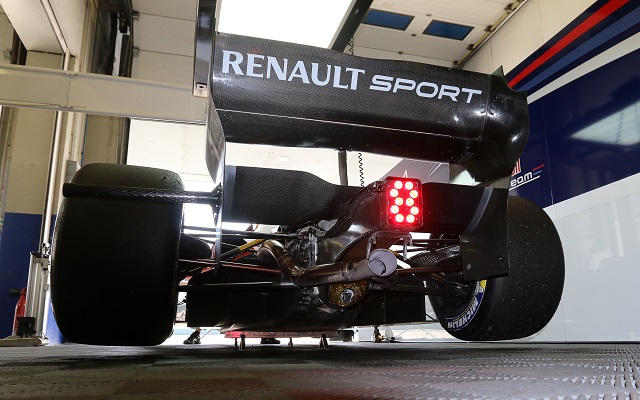 World Series by Renault have released the preliminary entry list for the three-day Formula Renault 3.5 test at Motorland Aragon.

Teams’ champions DAMS will field Nyck de Vries in their title-winning #1 car for the entirety of the test, with the Dutchman set to step up to the series with the French team in 2015. Malaysian racer Jazeman Jaafar, who contested two seasons in FR3.5 and scored two Monaco podiums, will join de Vries on Monday and Wednesday, with the Tuesday driver still to be announced.

Canadian racer Nicholas Latifi, who took a surprise podium during his guest outing in the final race of the 3.5 season at Jerez, will run with Arden for two days, as will European F3 race winner Lucas Auer. Formula Renault 2.0 Alps runner-up Charles Leclerc will test with the team on Monday morning, before handing over the car to Eurocup graduate Egor Orudzhev, who will also do Tuesday.

Formula Renault NEC champion Ben Barnicoat and his title rival Seb Morris will test with Fortec on Monday, having both raced for the team in 2.0 in 2014. Jaafar and GP3 racer Luis Sa Silva will take over on Tuesday, with Orudzhev and a yet to be announced driver running on Wednesday.

French squad Tech 1 Racing will field GP3 race winner Jann Mardenborough and Eurocup frontrunner Andrea Pizzitola for a day each. Asian Formula Renault champion Maxx Ebenal will do a session on Tuesday, while Guillaume Cunnington – the reigning champion of AFR’s Master class for drivers over 35 – will take part in two sessions.

AVF’s 2014 regular Beitske Visser will do all three days with the Spanish team. 2.0 Alps race winner Matevos Isaakyan will join her on Monday, while fellow Alps regular Alex Bosak is to do the two remaining days.

Having tested with Strakka at Jerez, Eurocup runner-up Dennis Olsen returns to the team for Motorland for the entire schedule. Cypriot star Tio Ellinas, who has spent 2014 without a full-time drive, will partner Olsen on Monday, while Luca Ghiotto, who ran for Draco in his rookie season in 3.5, will do Tuesday and Wednesday.

NEC runner-up Louis Deletraz will test with Zeta Corse for a day, before handing over the car to Eurocup graduate Vasily Romanov. Gustav Malja – Eurocup regular and NEC race winner – will run in the other car for all three days.

Matthieu Vaxiviere, who banked two podiums for Lotus in his debut 3.5 year in 2014, will return to the team for two days of testing. Pizzitola, who used to be Vaxiviere’s title rival in French F4, will also do two, while Lotus junior and Eurocup frontrunner Alex Albon and Latifi will get one each.

German F3’s top rookie Indy Dontje will test with Comtec on Monday, with GP3 frontrunner Marvin Kirchhofer running on Wednesday. Meindert van Buuren, who took a best finish of fifth in his debut year in 3.5, will test on Tuesday and Wednesday.

Euroformula Open champion Sandy Stuvik will do two days with Pons, before handing over the car to former teammate and GP3 regular Nelson Mason. Sa Silva will test with the team on Monday, while Oscar Tunjo, who is set to race with the team in 2015, will complete the rest of the running.