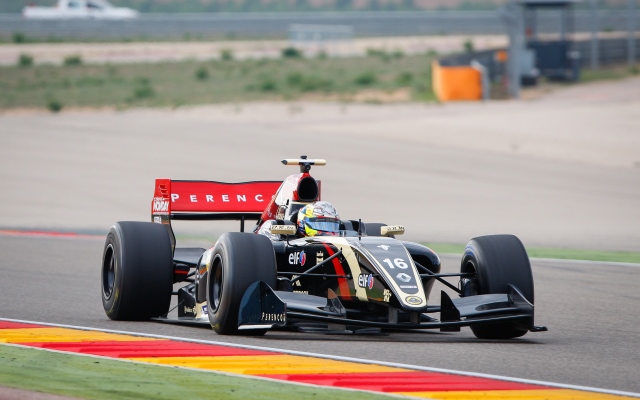 Alex Albon set the pace on his first morning in a Formula Renault 3.5 car as the three-day post-season test at Motorland Aragon got underway.

The Lotus F1 junior driver was one of 12 rookies taking part during the morning by invite from Renault Sport Technologies.

Driving for the Lotus-branded Charouz team, Albon set a time of 1m41.629s to put him nearly two tenths ahead of second-placed Draco regular Pietro Fantin.

Beitske Visser was third as she continues with her 2014 team AVF ahead of the second-best rookie, Formula Renault 2.0 Alps runner-up Charles Leclerc.

With the rookie invites only officially valid for the morning session, Leclerc will hand his Arden car over to Egor Orudzhev for the rest of the day, but the others are set to continue for the afternoon.

Andrea Pizzitola was fifth in the second Lotus car ahead of the third- and fourth-best invitees, FR2.0 NEC runner-up Louis Deletraz for Zeta Corse and Dennis Olsen for Strakka Racing.

Tio Ellinas was eighth in the other Strakka car ahead of Nicholas Latifi at Arden and Jazeman Jaafar at DAMS.

Other invitees included third-placed Alps driver Matevos Isaakyan, who was 11th fastest for AVF, and Eurocup and Alps champion Nyck de Vries, who continued his preparations for the 2015 season with DAMS with the 12th best time.

Nissan protege Jann Mardenborough received an invite to Tech 1 and was 16th fastest, with the invitees completed by Bruno Bonifacio (17th for Draco) and Indy Dontje (19th for Comtec).