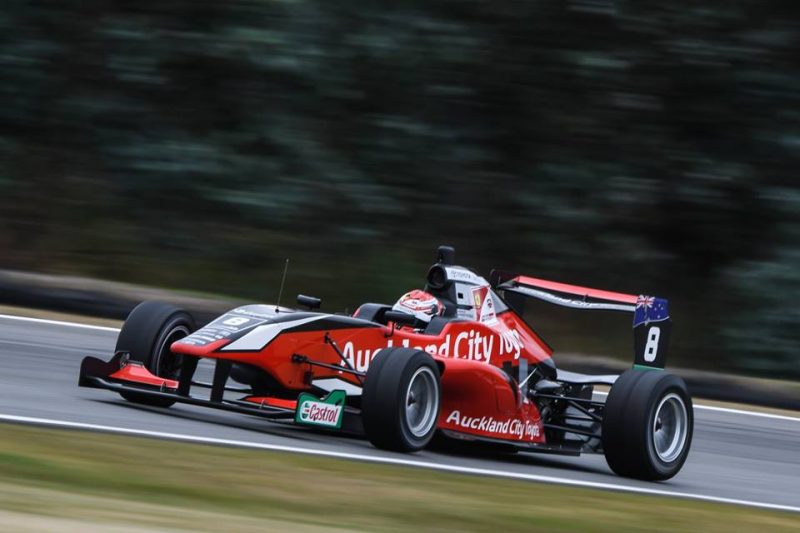 Marcus Armstrong held off late attacks from Liam Lawson to claim his first victory of the 2019 Toyota Racing Series at Teretonga.

Lawson had started from pole but made a poor start and lost ground to M2 Competition team-mate Armstrong, briefly dropping behind Artem Petrov too before recovering to second with a daring move around the outside of the Russian.

He had been closing in on Armstrong for a number of laps, closing the gap to less than a second, when MTEC Motorsport’s Petru Florescu ran into the gravel with eight laps remaining, prompting a safety car.

Lawson was immedietly on the attack when the track turned green with three laps remaining, attempting the same move around the outside he had pulled on Petrov earlier in the race. He ran side by side with Armstrong but a number of small mistakes from Lawson allowed Armstrong to hold onto the lead.

Armstrong claimed the chequered flag just 0.436 seconds ahead of Lawson to take his first win of the season, putting the pair level on points at the top of the standings.

Petrov was briefly able to get involved in the lead fight in the closing laps, but soon had to turn his attention to the charging Raoul Hyman. Hyman had started 11th?but made steady progress throughout the race to move up to fifth by the time the safety car neutralised the field.

He passed Lucas Auer on the restart and set about challenging Petrov for his third podium of the season, but ran out onto the grass on the final corner, dropping all the way back to his starting position and crossing the line 11th, potentially ending his title hopes.

Petrov took his first podium since 2017 in third, ahead of Cameron Das and Auer. The top five were all M2 driverd.

Kazuto Kotaka took sixth after spending much of the race in a four-way fight with Das, Hyman, and Brendon Leitch, who ended up down in eighth after being passed by Australian Formula 3 champion Calan Williams late on. Esteban Muth, and Dev Gore completed the top 10.