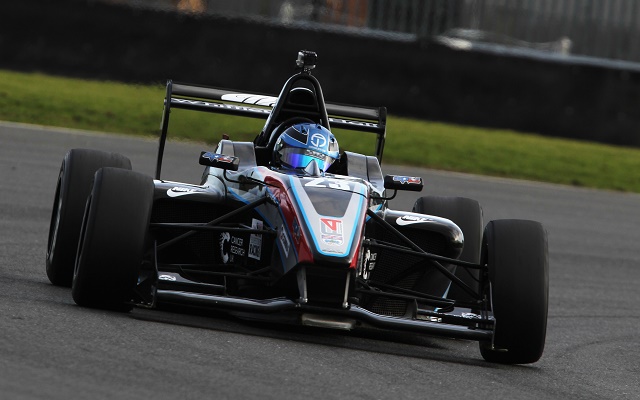 Jordan Albert made the most of his reverse-grid front row spot to secure his and Sean Walkinshaw Racing’s second win of the 2015 BRDC F4 season at Brands Hatch.

Lanan Racing’s Chris Mealin was the poleman after finishing eighth yesterday but was way too eager off the line, undoing his victory bid with a massive jump start.

And the advantage he gained with it was short-lived as Jack Lang was pitched into the gravel at Paddock Hill Bend, bringing out the safety car.

Mealin’s ten-second penalty was announced shortly after the restart, making Albert the de-facto leader of the race. Omar Ismail was now a close second, while Harrison Newey battled to keep Tom Jackson behind for the final podium spot.

But, as the leading drivers maintained status quo, championship leader Will Palmer charged up the field. Having restarted the race in ninth place, he quickly battled his way into sixth and soon found himself behind nearest points rival Rodrigo Fonseca.

The duo battled closely for a lap and a half, before Palmer found his way through at Druids.

As soon as that was settled, there was drama out front, as Newey pulled a move on Ismail at Sheene. The CDR driver tried to keep his position by hanging round the outside, but ended up spinning around.

On the final lap, both Newey and Jackson got within half a second of Albert, but the Sean Walkinshaw Racing man held on, taking the win.

Palmer was fourth and recorded the fastest lap to secure race three pole, while Fonseca completed the top five.

Ciaran Haggerty finished a hard-fought race in sixth, ahead of a recovering Ismail, the penalised Mealin, Al Faisal Al Zubair and Fernando Urrutia.

Sisa Ngebulana and Akhil Rabindra, who were set to finish the race in the top ten, came together on the final lap and found themselves in the gravel.