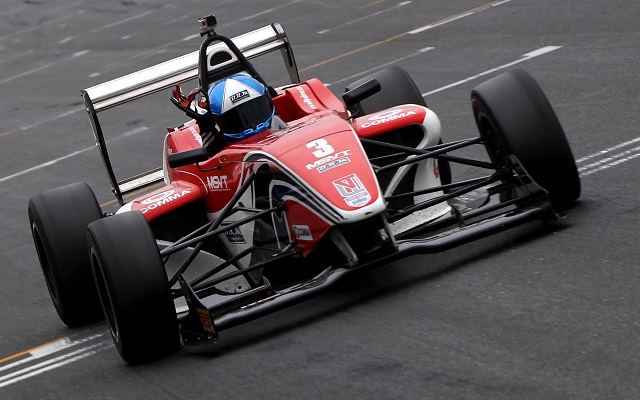 Will Palmer wrapped up the 2015 BRDC Formula 4 Championship title with a round to spare with victory in the third and final race of the Donington Park weekend.

Only needing to beat his rivals Tom Jackson and Harrison Newey in the final race, Palmer started from pole position and got a good getaway as HHC Motorsport team-mate Newey dropped from second to third.

Much of the race was spent behind the safety car after two separate incidents saw Chris Mealin and Sisa Ngebulana respectively beached in gravel traps.

Each time Palmer had a decent lead eliminated, but on both restarts he was able to quickly break away from the field as?Rodrigo Fonseca concentrated on keeping Newey behind him.

He took his 10th win of the season from 21 races with a margin of almost 4.5 seconds over Fonseca, who kept Newey at bay to finish second.

Hernan Fallas picked up his best result in the series in fourth having started third, while Ciaran Haggerty worked his way to fifth past Omar Ismail and Ameya Vaidyanathan.

The top 10 was rounded out by Jack Bartholomew, Jordan Albert and Akhil Rabindra.

Jackson started 11th and finished 12th, having had Mealin spin across his bows at Old Hairpin on the first lap, sending him off track as well.

That poor result was enough for Newey to lift himself above Jackson in was is now a fight for second in the standings.