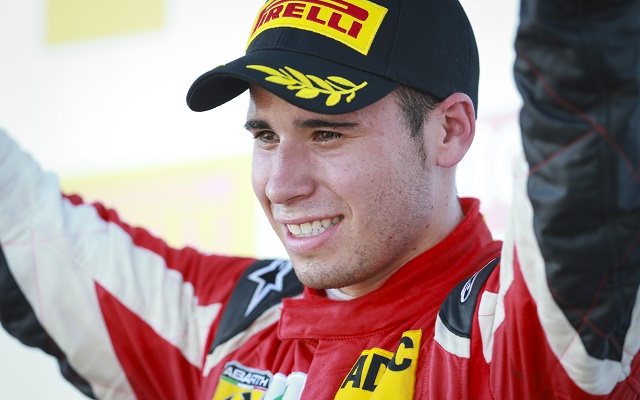 In doing so, the Australian maintained mathematical chances at the title, with championship leader Marvin Dienst finishing fourth and his main rival Joel Eriksson in ninth.

Reverse-grid poleman Jannes Fittje got an excellent launch off the grid and looked set to keep the lead early on, but decided to take way wide a line into Turn 1, clipping the grass and compromising his corner exit.

As such, the Motopark rookie slipped to fourth, allowing Mawson, Tim Zimmermann and Marek Bockmann through.

And soon, Fittje had championship leader Dienst behind him – the HTP driver making working his way up from ninth while Eriksson moved up to seventh from tenth.

While Mawson broke away from Zimmermann and Bockmann, Dienst shadowed Fittje for several laps before finally pulling off a late dive into Turn 1.

But Eriksson, who had swept the weekend up until then, faced the exact opposite situation, getting stuck behind Robert Shwartzman and soon falling prey to a surprising move from Mick Schumacher.

And he was further impeded by an overtake from Janneau Esmeijer, which also allowed teammate Michael Waldherr and Mike David Ortmann to pass him from both sides, demoting the Swede out of the points.

However, he managed to move back into ninth when Schumacher, having dived past Shwartzman, broke his front wing while battling Fittje, taking both of them out of contention.

At the chequered flag, Mawson took the win by nine seconds, with Zimmermann as runner-up and Bockmann holding off Dienst to claim his first podium in ADAC F4.

Shwartzman inherited fifth, ahead of Esmeijer, Ortmann and Waldherr, with Eriksson holding off Cedric Piro for ninth.

Heading into the inaugural ADAC F4 season finale, Dienst will lead Eriksson by 30 points, with Mawson a further 24 down.