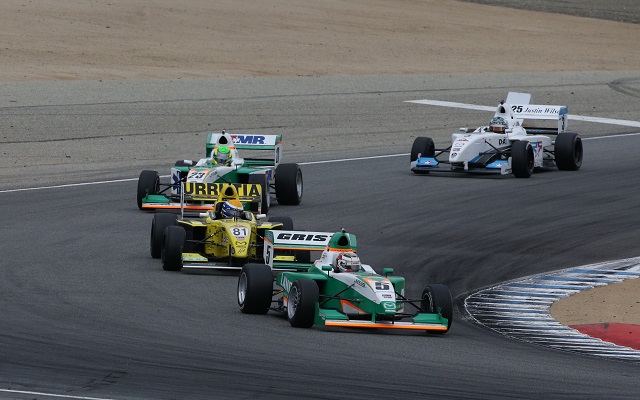 Garett Grist completed his Pro Mazda campaign in style by taking his second victory?at Laguna Seca in a race which saw little action due to three caution periods.

Grist had a better jump than champion Santiago Urrutia at the start and looked to quickly pull away, yet an off for Florian Latorre brought out the safety car after the opening lap.

The restart after a lengthy caution period saw Urrutia make an aggressive but ultimately unsuccessful move on Grist on the inside of turn one which ended in contact between the duo and the Uruguayan damaging his front wing.

Just as they completed the first turn, though, it was a full-course yellow once again for an incident that Raoul Owens’ car upside down.

Grist comfortably stayed ahead once they got going again and built a lead of 1.4s?by the time he completed a lap.

However, in another lap, the race was neutralized for the third time following Alessandro Latif‘s retirement.

Only one lap was?left once they were back under green and Grist brought his car home ahead of champion Urrutia to grab third in the standings.

Neil Alberico finished third to secure the runner-up spot in the championship, followed by Will Owen, Dalton Kellett and the charging Patricio O’Ward.

Timothe Buret lost two positions throughout the race to end up seventh as the top ten was completed by Jose Gutierrez, Weiron Tan and Kyle Connery.