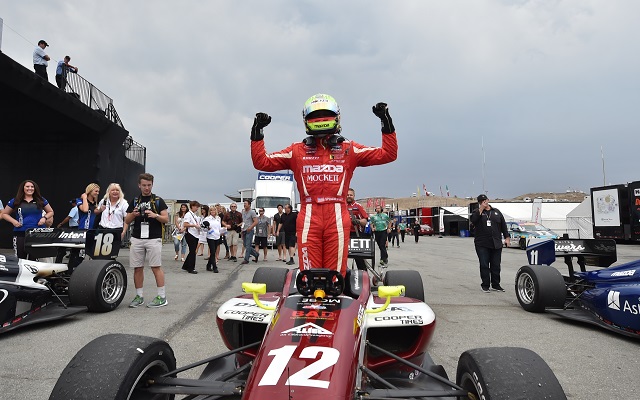 Spencer Pigot became the 2015 Indy Lights champion by doubling up at Laguna Seca with a race two win, as rival Jack Harvey received a penalty for jumping the start and finished only 10th.

Pigot kicked off the race alongside pole-sitter Max Chilton?but?Harvey with a notable start made it a three-way fight for the lead coming into turn one.

Being on the outside line, Harvey’s lightning getaway, which was later deemed to be a jump start, did not result in making up any positions.

Pigot, on the other hand, took the lead ahead of Sean Rayhall, both passing Chilton.

The first of two cautions soon took place when SPM’s Scott Anderson suffered a mechanical issue and had to stop his car on track.

During the full-course yellow Harvey was handed the penalty which saw him relegated to 11th.

Pigot seemed trouble-free ahead, keeping the lead until the safety car’s second appearance on the track, this time due to a crash from Ethan Ringel.

The Juncos driver nailed the second restart as well but could not build a bigger lead than a second until the final stage,?when it?was increased by a another?second.

The podium was completed by Chilton?6.6 seconds behind, the Briton was once again unable to convert his pole position into a victory.

Andretti’s Shelby Blackstock had a great race by spending most of it in fourth, only to lose two seconds during the final lap which allowed Ed Jones to get ahead.

The rookie driver from Dubai had a quiet race, unable to gain?any positions and settling for third in the standings.

RC Enerson took sixth followed by Juan Piedrahita and Felix Serralles, the duo spending the race close to each other in eighth and ninth.

Harvey ended up tenth, holding off late charges from Kyle Kaiser, who dropped down the order at the start, with the field completed by Heamin Choi.