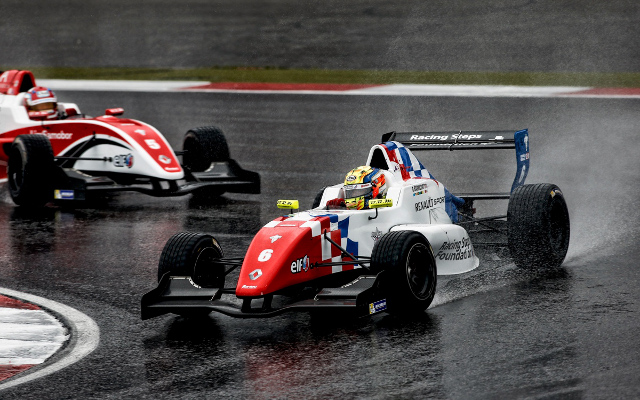 The race started with four laps behind the safety car which left the field with less than 20 minutes of green-flag running.

Barnicoat flew into the lead when the green flag waved and quickly pulled away from the fighting duo of Martin Kodric and Ukyo Sasahara to build a safe gap.

The RSF protege eventually saw the chequered flag six seconds in the clear with Kodric securing his maiden podium in the series in second.

The Croatian had to withstand massive pressure from Sasahara in the early stages?and even lost the place for a lap before a mistake from the Japanese driver allowed him to slide back into the runner-up spot.

The podium was completed by Anthoine Hubert as Sasahara dropped further throughout the race, with Louis Deletraz, who was investigated for leaving the track and gaining advantage, and Kevin Jorg taking fourth?and fifth?respectively.

Jack Aitken finished sixth?after a late overtake on Sasahara, who crossed the line just ahead of Jake Hughes, but would be demoted to eighth for cutting a chicane to stay in front of the Briton.

The top ten was completed by Ignazio D’Agosto and Harrison Scott.

Having finished?the highest placed of the championship’s top four, Deletraz maintains his lead in the standings five points ahead of Jorg.