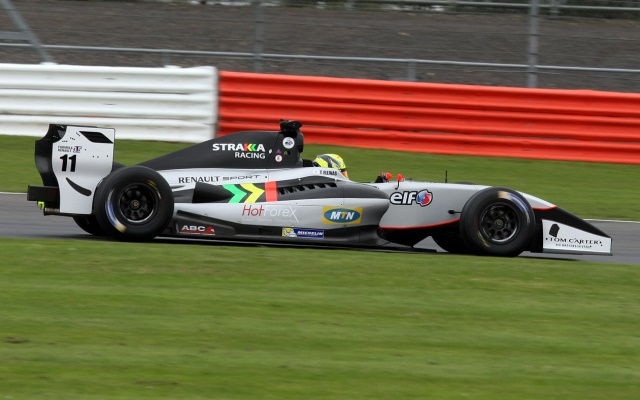 Tio Ellinas was victorious in a highly-entertaining Formula Renault 3.5 race at the Nurburgring to lead Strakka Racing’s first one-two finish in the championship.

The race kicked off under damp circumstances which forced the drivers to pick between slick and wet tyres.

Pole-sitter Oliver Rowland suffered a terrible start as the Briton first bogged down then tangled at turn one to find himself at the back of the pack.

That allowed Pietro Fantin to claim the lead and the Brazilian headed the field in a dominant fashion, building a lead of 12 seconds in a few laps.

French duo Tom Dillmann and Aurelien Panis, both on wets, were into second and third but their tyre choice soon turned into a disadvantage and?started to lose massive pace.

As a result, Ellinas and Matthieu Vaxiviere were promoted to be Fantin’s closest chasers with Rowland flying through the field to be fourth already at that point.

Following the inevitable pitstops for those who started to struggle, Aurelien Panis‘s car was stranded on the outside of turn one which brought out the safety car.

The leading drivers of Fantin, Vaxiviere, Rowland and Dean Stoneman opted to stay out though, which put the already-pitted Strakka duo Gustav Malja and Ellinas to the fore in the search for a winner.

Indeed, when the race restarted there was no time for the leaders to build an advantage big enough to stay in contention for the victory and one-by-one they pitted and rejoined around the bottom of the top ten.

Ellinas managed to overtake Malja in traffic just after the restart to earn what eventually became the lead.

The Cypriot looked set to score a victory but the weather provided another twist with suddenly heavier rain hitting the track for the final couple of laps.

A mistake from Ellinas allowed Malja to be all over his teammate and the Swede even managed to briefly make a move?on the final lap.

However, he then went a bit too wide at the next corner, which was enough to lose the lead to Ellinas again.

Without any further drama, Ellinas and Malja locked out the top two, with the podium completed by Nyck de Vries, who earned the spot after Egor Orudzhev lost ten seconds in the late rain.

Fantin managed to recover to fourth only to receive a penalty regarding his mandatory pit stop, which gave Alfonso Celis fourth with Orudzhev ending up fifth.

Stoneman took sixth, with the top ten completed by Marlon Stockinger, Rene Binder, Fantin and Rowland, the latter managing to pass championship rival Vaxiviere despite a second spin late on at turn two.