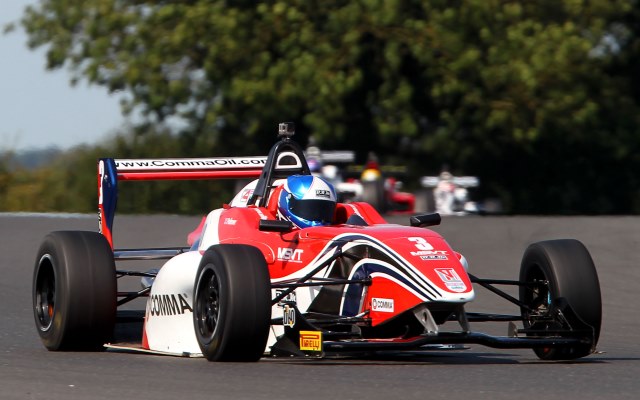 Will Palmer is on the brink of securing the BRDC Formula 4 title after winning race two at Donington Park, charging from seventh to be the effective leader by the end of lap three.

Polesitter Jordan Albert held the lead off the start but was quickly handed a 10-second penalty for a jump start.

Palmer was still sixth going onto lap three but ended it with only Albert ahead of him on the road, passing Ciaran Haggerty and Jack Bartholomew and then benefiting when Chris Mealin and Omar Ismail made contact at the final corner.

Palmer went on to move ahead of Albert physically and finished eight seconds clear of Bartholomew at the chequered flag.

Ismail was third on the road but took a five-second penalty for exceeding track limits, dropping him to sixth.

That meant that Ameya Vaidyanathan‘s strong form continued with a second straight podium, passing Haggerty on the last lap and ending up third.

Race one winner Harrison Newey was classified fifth ahead of Ismail. Tom Jackson, the driver closest to Palmer in the standings, was seventh.

That increases Palmer’s advantage to 103 points – a lead of 95 at the end of race three would be enough to wrap up the title. Newey is just three points behind Jackson.

Albert’s penalty put him eighth in the final results, with Lanan drivers Rodrigo Fonseca and Chris Mealin completing the top 10.