After he picked up a race ban for another major crash at Spa, Peter Allen analyses the situation of F3 racer Lance Stroll, and how his recent errors don’t match with his previous form.

Following on from the mess at Monza, driving standards continued to be a problem at the FIA Formula 3 European Championship round at Spa-Francorchamps.

In particular, Ferrari protege Lance Stroll continued to drive recklessly. Following on from his frightening accident at Monza, he was penalised for contact in race one and then eliminated the lead three cars in one crash as he attempted to defend first place in race two.

He was subsequently – and quite rightly – banned from the final race of the weekend.

But the young Canadian’s recent spate of high-profile errors come as a surprise to those of us who tracked his impressive first year-and-a-bit in single-seaters, in which he secured titles in Italian Formula 4 and the Toyota Racing Series.

We profiled Stroll in February after his TRS success, and hailed the 16-year-old as a standout driver with a certain future in Formula 1. As well as his father’s wealth and the support from Ferrari, he was certainly showing the on-track promise to eventually rack up the necessary superlicence points.

While his speed was good, it was the apparent maturity for his age that was particularly impressive.

His TRS campaign was primarily built not on outright pace and winning races, but more on staying out of harm’s way and consistently scoring points. And that was in a category where races are scrappy and contact commonplace.

Stroll won four of the 16 races but retired just once (in a clumsy clash with a team-mate that he held his hands up for). His considerably older and more experienced team-mate Brandon Maisano had the better outright speed and won five times but was involved in incidents more regularly and finished 108 points adrift as a result.

To the outside, for Stroll to now be involved in such a series of collisions in quick succession suggests a divergence from the approach that served him so well before. But why have things changed? 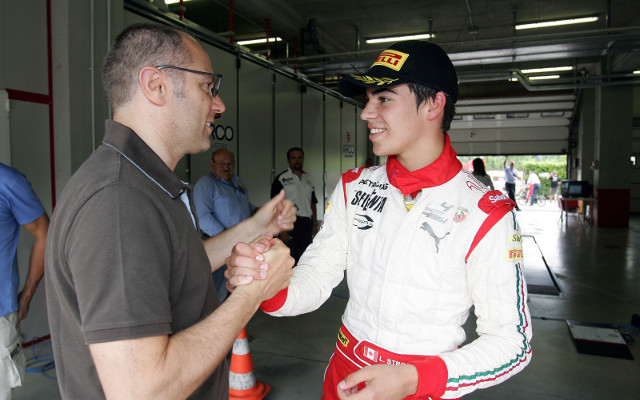 There is of course no doubt that European F3 is a tougher, more competitive series than anything he has done before. Though unlike a few of the championship’s rookies, he certainly deserves his place there, as an F4 champion.

The success of Max Verstappen last year means pre-season ambitions may have been high, but there would be hardly any shame for Stroll to be trailing the championship’s more experienced names, either. Not to the wider public, anyway.

His pace has been been very good – he’s a regular feature in the top six, and almost always ahead of his ex-TRS rivals Maisano, Santino Ferrucci, Arjun Maini and Sam MacLeod.

In the standings, he may not be on the level of ex-Formula Renault 2.0 racer and new points leader Charles Leclerc, but he’s been part of the impressive crop of rookies further down the top 10 that includes fellow F4-level graduates George Russell, Maximilian Gunther and Mikkel Jensen, as well as another former FR2.0 man Alex Albon.

That level of performance is very respectable and should surely be satisfactory – particularly given that Stroll has time on his side. Desperation is always understandable from a driver who is limited on funds, having to treat every race like its their last. For Stroll, that’s of course not the case.

So if there is pressure to improve his results, where could that be coming from? Is it from those around him? If it was from Ferrari, it would be certainly misguided. F3 does certainly not have to be a one-year project, just because a very select few have made it happen recently.

Is it just from Stroll himself? Perhaps he is too used to winning, and has not adjusted his mentality accordingly for racing in a much tougher series.

Maybe it’s nothing to do with pressure or desperation, but just a weakness in his driving. He said the contact with Giovinazzi in Monza happened because the F3 cars’ side airbox blocked the view in his left-hand mirror.

There could well be a degree of truth in that – and it could have contributed to the Spa incident too – but it won’t really wash as an excuse unless other drivers have had problems with it in the past. If it is a weakness of his, it needs fixing. 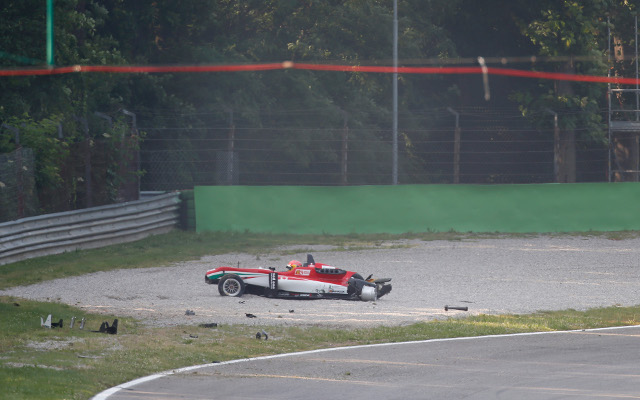 Whatever the contributing factors, there needs to be an adjustment in his approach, whether that’s in terms of his targets for races and how strong he defends a position, or in just improving his awareness when driving. Ultimately, the signs are that both may need work – just like they did for Romain Grosjean in F1, for example.

There’s therefore little reason why he should not be able to get on top of his recent problems quickly. To me, this is not an issue that requires the FIA or championship officials to deal with – Stroll has enough people around him to help.

In the context of what took place at Spa however, it’s worth going back to something that happened after his aerial crash at Monza. Stewards judged that Stroll should start from the pits for the final race that weekend, but that decision was appealed by Prema and he got to start from his grid position.

It begs the question as to whether the issue was taken seriously enough by those around him, prior to Spa. There can be little doubt that it will be now – now that he’s cost team-mate Felix Rosenqvist in his title bid, with Prema currently facing a big fight to take a fifth straight European F3 drivers’ crown. Helping Stroll may help the team as a whole.

On that note, Stroll’s not exactly the only driver suffering from a sudden loss of consistency. Giovinazzi’s early points lead was built on a run of nine podiums from the first nine races. Two rough rounds later, including Spa race one contact with Rosenqvist that was eerily similar to Stroll’s (it came at Les Combes while defending the lead), he’s dropped all the way down to fourth.

The Italian will need to regain that form immediately if he’s to win out in the end – beating Leclerc and Rosenqvist on pace alone will be difficult. And in this case, as a third-year F3 racer, the pressure is most certainly on.

As for Stroll, there’s absolutely no doubt he can rebuild his reputation – a reputation for intelligent, mature and fast driving. He’s got the added luxury that time is on his side, and that there is no need to risk everything right now just to start winning races.

This has hopefully just been a rather high-profile blip. He’s undoubtedly still one to watch.

The masterful Stoffel Vandoorne continues to impose on the rest of the GP2 field, claiming a record seventh pole and fifth consecutive feature win, with rookies Sergey Sirotkin and Alex Lynn in second and third. Rio Haryanto again denies the Belgian in the sprint, while Vandoorne’s teammate Nobuharu Matsushita joins him on the podium for the first time. 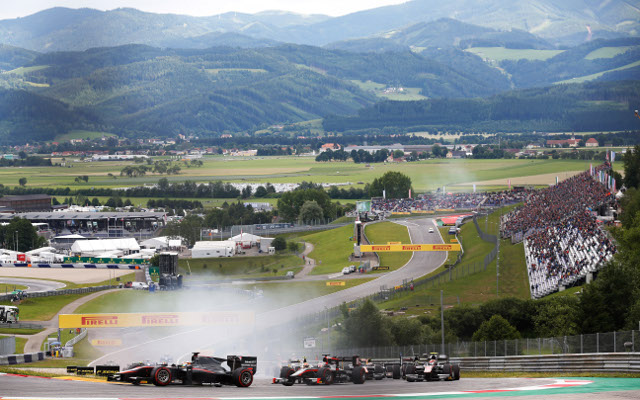 With just one win in their previous three years in GP3, an ever-improving Trident completes a shock Spielberg sweep. Luca Ghiotto dominates the first race, while Oscar Tunjo fights through to win the second. Erstwhile leader Esteban Ocon is on the podium in both races but then disqualified on Sunday and has now slipped behind Ghiotto and Marvin Kirchhofer.

Three separate crashes in the three races at Spa make a big impact on the standings. A clash between Antonio Giovinazzi and Felix Rosenqvist hands the race one win to Charles Leclerc, who stayed out of trouble for the rest of the weekend and leaves with a handy advantage in points. Jake Dennis survives to win the other two races and has now passed both Giovinazzi and Rosenqvist for second.

Points leader Joel Eriksson significantly bolsters his advantage in the mixed-conditions round by taking his third and fourth win from the last six races. Newcomer Lando Norris, of MSA Formula fame, calmly wins the reverse-grid race, while his teammate Robert Shwartzman is the only driver to end all three races on the podium. 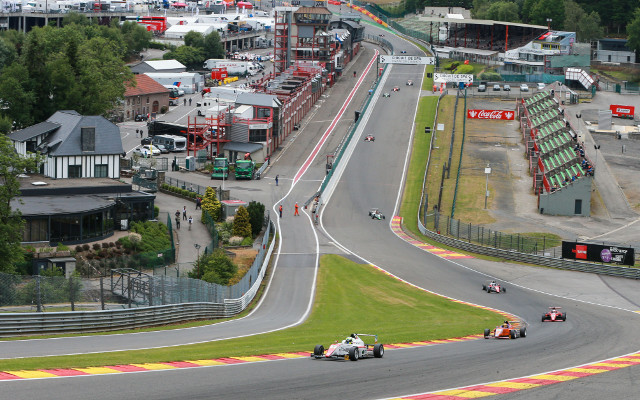 Niko Kari dominates qualifying and then denies Aleksey Korneev in the first two races to take the points lead off Aleksanteri Huovinen. Kari stalling in race three allows Korneev to beat Nikita Troitskiy for a deserved win, while the Finn himself recovers from 13th to take fourth.