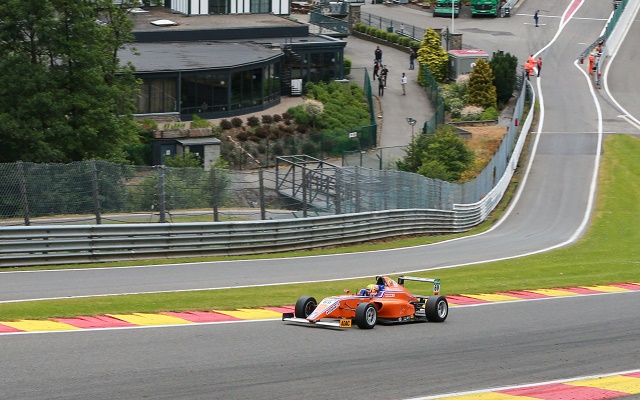 It took MSA Formula frontrunner Lando Norris just three attempts to win in ADAC F4 as he prevailed in the third race of the Spa round.

Norris, having finished the first two races in fourth and second, started the final outing from seventh and fought through to become Mucke’s first winner in the series.

Jenzer’s Marek Bockmann started the race from reverse-grid pole and duly led into turn one, while fellow front row occupant Giorgio Maggi was slow off the line, letting Janneau Esmeijer and a number of others through.

Esmeijer was then tapped into a spin in La Source by Ralf Aron and Maggi retook second, only to be swarmed over the opening lap as he fell to eighth.

Second was now with the fast-starting Norris and the Briton wasted little time catching up to Bockmann. On lap three, he was already all over the race lead, having a serious look into Les Combes before overtaking the Jenzer driver further in the lap.

Bockmann was then also passed by Van Amersfoort Racing’s Joseph Mawson, whose teammate Mick Schumacher went off further down the order, chasing after Motopark’s Michael Waldherr.

That incident did not bring out the safety car but the next one did shortly thereafter – just as Robert Shwartzman passed Bockmann, Aron went into the wall at Pouhon.

The race restarted with less than ten minutes to go and Norris calmly maintained the lead, while Mawson held second. Behind them, Shwartzman and points leader Joel Eriksson were fighting hard for third, while Bockmann spun out behind.

Shwartzman passed Eriksson at Bus Stop, crossing the start-finish line in third, only to run wide at La Source and give up the spot.

But Neuhauser’s Kim-Luis Schramm got a fantastic run out of Eau Rouge and cleared them both heading into Les Combes.

Schramm’s effort, however, would not stand as a big crash for Jannes Fittje left his car without left wheels and brought out the safety car, only to be swiftly followed by race-ending red flags.

The race was rolled back to lap nine and it was Shwartzman who got to join Norris and Mawson on the podium.

Eriksson took fourth ahead of Neuhauser teammates Schramm and Tim Zimmermann, while David Beckmann nursed a damaged front wing from the very start to take seventh.