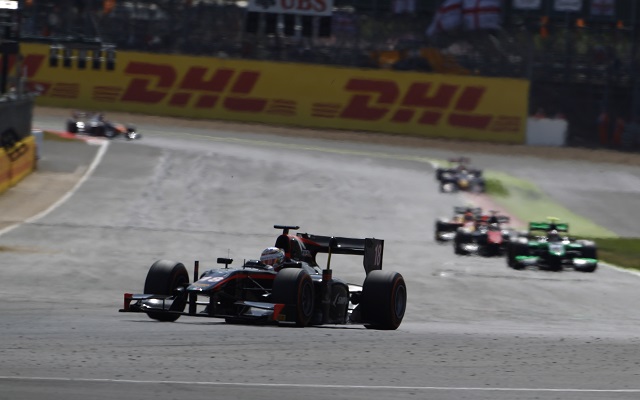 Stoffel Vandoorne has done a remarkable job to dominate such a strong GP2 field in just his second season in the category.

For his unbeaten streak in feature races to be broken at Silverstone last weekend by a rookie speaks volumes about Sergey Sirotkin‘s recent form.

The Russian made the podium for the first time in the Monaco sprint race, and then finished second to Vandoorne in the feature race at Spielberg.

He found another level at Silverstone – some achievement given it was his first time ever racing there. He rivalled Vandoorne throughout qualifying – with the pair in a class of their own some four tenths clear of the rest – and ultimately came out top when the Belgian made an uncharacteristic error.

Sirotkin then drove a fine feature race, recovering from losing the lead to the fast-starting Richie Stanaway with a bold and opportunistic manoeuvre on the Kiwi at a safety car restart.

From there he pulled away to take a commanding maiden victory, and was scrapping with the regular frontrunners again in the sprint race.

Halfway through the season, Sirotkin is fourth in the standings and the first of the rookies, ahead of GP3 champion Alex Lynn and Formula Renault 3.5 runner-up Pierre Gasly.

With all his points accumulated in the last three rounds, he’s been the second-highest scorer in that time behind Vandoorne, putting him on course to climb above relative veterans Alexander Rossi and Rio Haryanto and into the runner-up position if he maintains this form (and there’s nothing to suggest it’s been fluked). 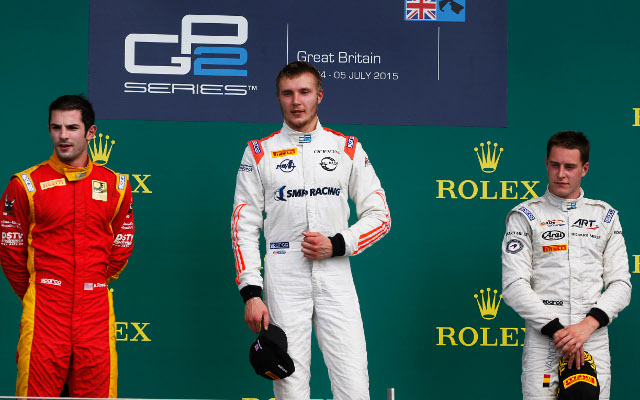 It’s important to note this hasn’t been achieved with a ‘trendy’ team, either. Signing with Rapax for this season wasn’t going to be a first-class ticket to success, given the Italian squad had struggled since Stefano Coletti’s collapse in the middle of 2013.

Qualifying form had been a particular challenge, so the Silverstone pole marks quite an achievement by both driver and team.

In out-scoring Lynn and Gasly, he’s beating the two cars fielded by DAMS, the dominant team of the current generation of GP2 car with three titles from four seasons.

On Sirotkin’s side is that even though he’s a GP2 newcomer, he has been racing high-powered single-seaters since he did Auto GP in 2012, with two years in FR3.5 following that.

But in racing terms he’s still relatively inexperienced, in only his fifth full season. And at 19, he’s quite a bit younger than those ahead of him too.

Sirotkin first stood out on his way to the Formula Abarth title in 2011. It was on his 16th birthday that August when he notched up his third win of the season, having led the way since his maiden triumph at Valencia in May.

Having secured what was eventually a dominant championship triumph with two more wins, he then embarked on an ambitious double campaign of Auto GP and Italian F3 for 2012.

Auto GP (then in much better health than it’s been in recent times) should have been a tough challenge for a driver of such inexperience but Sirotkin took to it with ease, winning on just his second weekend on his way to third in the final standings.

It was mid-way through his rookie FR3.5 campaign that followed when he shot to sudden prominence, not for anything he’d done on track but rather the attempts of those around him to propel him into Formula 1 as part of a Russian rescue deal for the beleaguered Sauber squad. 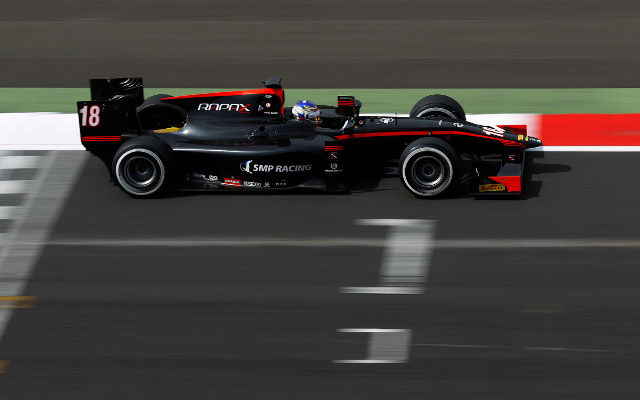 There was no doubting that the timing of such a step would be premature. But we staunchly defended Sirotkin’s ultimate potential, after he added some very promising early showings in a super-strong FR3.5 to those previous successes further off the radar.

The Sauber deal, fortunately, gradually fell apart, and he returned to FR3.5 in 2014 for a title assault with top team Fortec. The first part of his season was destroyed by a series of retirements for which he appeared to be entirely blameless, but he reacted perfectly with a first win from pole on home soil at Moscow Raceway.

What followed – just two more podiums from the last nine races – was disappointing, though. He was a consistent top-five finisher, but lacked the outright pace of his rivals, who all had less experience in the category than him.

Consequently, he arrived in GP2 this year will plenty still left to prove if he was to earn Formula 1 attention on the merit of his on-track performances.

Winter testing was encouraging, but his recent form has far surpassed all expectations.

If he can carry on like this, he will put himself firmly into the F1 shop window. Nothing should be taken for granted, and time is still on his side, but there’s no reason to assume that he can’t continue performing at this level for the rest of the season either.

With time, Sirotkin is starting to fulfil his potential.

For the first time this season, Stoffel Vandoorne fails to win a feature race, fails to score in the sprint race and sees his points lead cut during a weekend. Sergey Sirotkin?takes maiden victory from pole position with Vandoorne finishing third behind nearest rival Alexander Rossi, who is then fourth in the sprint race. Rio Haryanto takes third reverse-grid win from five rounds and Raffaele Marciello and Pierre Gasly join him on podium in their best weekends yet.

Luca Ghiotto‘s points lead is cut to five after missing pole and the podium for the first time this season, while closest rival Marvin Kirchhofer?nets second victory after keeping?Emil Bernstorff at bay in race one.?Esteban Ocon follows a quiet sixth in race one with second in race two behind?Kevin Ceccon, who wins a race for the first time since 2011. There are first podiums for?Matt Parry and?Ralph Boschung. 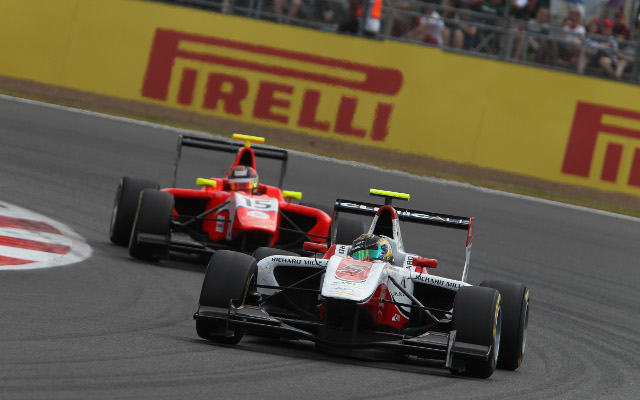 The gap between Konstantin Tereschchenko and Vitor Baptista remains at eight points, with the Brazilian winning race two from pole with the fastest lap after retiring from race one having initially led from pole. Tereschchenko is second in race one and then fourth in race two.?Leonardo Pulcini takes his maiden victory in race one.

In a chaotic weekend, Thiago Vivacqua, Jake Hughes and Vasily Romanov are race winners. Hughes fails to finish the other two races but still takes the championship lead away from fellow Brit and Koiranen driver Jack Aitken, who is seventh in race one and is then sidelined by fractured vertebrae after contact. Stefan Riener closes on both with a consistent weekend while Matevos Isaakyan loses out after being involved in much contact including the Aitken clash.

Joey Mawson slashes the gap to leader Joel Eriksson to four points with a win and two second-places. After Eriksson is banned from race one for ignoring red flags in qualifying (along with Mick Schumacher), he passes Mawson late in race two to win and then manages ninth in race three after having to start at the back. After failing to convert pole into wins in the first two races, early-season leader Marvin Dienst wins the third. 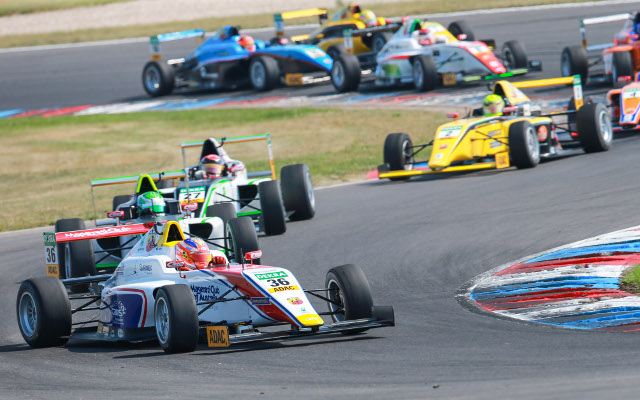 Martin Rump claims a hat-trick of victories to extend his lead from one point to 21. Rival Jake Parsons is second in the first two races and fourth in the last. Nick Rowe shows strongly, taking two thirds and a second place, and Sennan Fielding completes his debut weekend with a podium in the finale.