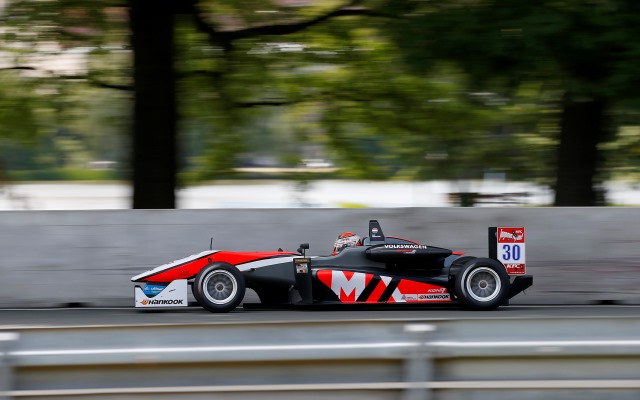 Max Verstappen notched up his fifth consecutive win in the FIA F3 European Championship in a second Norisring race that was interrupted by rain.

The 16-year-old Dutchman led from pole position to chequered flag. After the four safety car periods in race one, race two was neutralised on three occasions – the second of which leading to a red flag to allow the drivers to change to wet tyres.

After the race restarted – and the safety car made its third and final appearance – Verstappen opened up an advantage of nearly nine seconds over the opposition.

That dominant margin was aided by an incident behind following the red flag. Tom Blomqvist had passed Esteban Ocon for second place at the first corner of the race, but after the stoppage, Ocon attempted to regain the position at the same place. He forced Blomqvist to run deep, and as the Briton returned to the racing line, he was squeezed towards the outside wall by Ocon, causing contact between the two.

With Blomqvist stopping on track briefly before getting his car off the circuit, this caused the third and final safety car appearance. Ocon had by then been passed by Jordan King, and at the restart he was handed a drive-through penalty, finishing 14th.

That could have promoted King’s Carlin team-mate Jake Dennis into third, but he was re-passed before the end by Lucas Auer, who had earlier fallen behind the Racing Steps Foundation driver when he attempted to pass King but ran deep. Auer’s Mucke Motorsport team-mate Felix Rosenqvist had done exactly the same just beforehand, and had another moment when he attempted to pass Dennis, aquaplaning deep and falling back to sixth behind Santino Ferrucci.

In just his second weekend in the series, 16-year-old American Ferrucci had started fifth and although he lacked pace early on and dropped towards the lower end of the top ten, he kept his nose clean when the conditions worsened to move back up to fifth.

Antonio Fuoco worked his way up to seventh late on ahead of Nicholas Latifi and Antonio Giovinazzi, with Gustavo Menezes completing the top ten.

The first safety car was caused by a multi-car incident involving Felipe Guimaraes, Michele Beretta, Spike Goddard and Jules Szymkowiak, and the second triggered when Roy Nissany shoved the similar Mucke car of Tatiana Calderon off into the first hairpin.